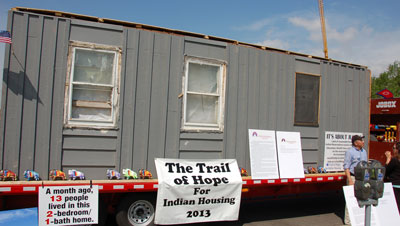 Paul Iron Cloud, Housing Director at the Oglala Sioux Lakota Housing Authority (OSLHA), looked across the Capitol Reflecting Pool at the dome of the Capitol Building and said, “Since Congress is not coming to see the need that is out there, we brought the house to them.” Behind him sat a trailer holding a grey wooden structure with dilapidated windows and peeling siding that had been transported over 1,500 miles from the Pine Ridge Reservation as part of The Trail of Hope for Indian Housing.

The Trail of Hope is an effort by the Oglala Sioux Tribe Partnership for Housing (OSTPH) and OSLHA to raise awareness and increase funding to address the desperate need for decent, safe, affordable housing on Native American lands. On Wednesday, April 17, 2013 representatives of both organizations placed the façade of a house from the Pine Ridge Reservation directly across from the Capitol Building in Washington, DC and invited policy makers to “see for themselves” the true state of housing on their reservation.

The stark reality of overcrowding on the Pine Ridge reservation was displayed by the structure. The 1,254 square foot house from which the structure was made had two bedrooms, one bathroom, and was housing thirteen tenants before it was dismantled. Such overcrowding on the reservation creates uninhabitable living conditions. Doyle Pipe On Head, OSLHA Assistant CEO, presented pictures of moldy ceilings and bath tiles, broken toilets, and large holes in walls covered with cardboard. The substandard housing environment puts the health of residents at risk. It is also a struggle to keep warm throughout South Dakota winters. “Our people are sitting in 2-3 feet of snow…[and the] need to keep a house like this warm, with high electricity bills and the high cost of propane [is costly]…houses need to be upgraded to deal with the kind of weather we deal with in South Dakota,” said Kevin Yellow Bird Steel, Tribal Council Representative of the Wounded Knee district.

Trying Their Best, But Never Enough

The Pine Ridge reservation in South Dakota is only one of many Indian Reservations in the U.S. lacking adequate access to affordable and dignified housing. Many partnerships in Native American community organizations have formed to address housing needs. Block grant funding from the Native American Housing and Self-Determination Act (NAHASDA) has helped finance some of these efforts. NAHASDA funds are also known as Indian Housing Block Grants and are awarded by the Department of Housing and Urban Development. A staff representative for Senator Tim Johnson (D-SD) revealed his commitment to reauthorizing NAHASDA this year. 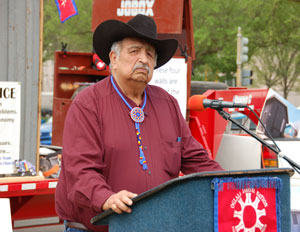 Although some funding sources exists that aim to address Indian housing needs, Trail of Hope for Indian Housing argues that more funding is needed to close the gap between lack of affordable units and the people who need dignified housing. “When you live in Pine Ridge it doesn’t take long, no matter where you go, to see the tremendous need and challenge that Paul and other entities working in housing face. We have many people who come to Pine Ridge to work on houses: the faith based groups, community based groups. Everyone tries their best to do what they can but it is never enough,” said Emma “Pinky” Clifford, coordinator of the Trail of Hope and Executive Director of OSTPH.

Moises Loza, Executive Director of Housing Assistance Council said of Trail of Hope: “I think the public generally has an idea about Indian reservations and what they are like but they really don’t know how bad the living conditions are…The conditions they live in diminishes the dignity that all humans deserve.”

For more information about the Trail of Hope for Indian Housing, visit: 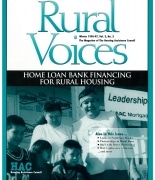 The Trail of Hope for Indian Housing