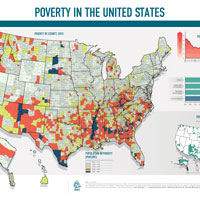 Poverty in the United States Map

The increasing prevalence of poverty in the United States is an inexcusable shame on this great nation. More Americans are living in poverty today than at any other time since the Census Bureau began measuring its occurrence. The issue of poverty has many complexities, but it is much more than an abstract condition for the over 40 million Americans who face daily struggles with food security, access to health care, and lack of basic shelter.

Forty years ago the Housing Assistance Council (HAC) was created to address poverty and housing inadequacies in rural America. In 1984, HAC published Taking Stock, one of the first comprehensive assessments of rural poverty and housing conditions in the United States. A key component of that seminal report was HAC’s national poverty map detailing poverty rates for every U.S. county in 1980. As a companion to 2012 edition of Taking Stock: Rual People, Poverty, and Housing in the 21st Century, HAC presents our newly updated poverty map, entitled “Poverty in the United States.” The map shows county-level poverty data from 2010 Census counts.

While some gains have been made in reducing poverty over the past several decades, poverty rates are still shockingly high for certain populations in rural America, namely minorities and children. HAC’s research also illustrates the continued persistence of high poverty within several predominantly rural regions and populations such as Central Appalachia, the Lower Mississippi Delta, the southern Black Belt, the Colonias region along the U.S.-Mexico border, Native American lands, and migrant and seasonal farmworkers. Often forgotten or hidden from mainstream America, these areas and
populations had poverty rates of 20 percent or higher in 1990, 2000, and 2010.

HAC’s poverty map presents the stark reality that too many Americans have been left behind or shut out of our nation’s economic promise and prosperity.

Download a PDF of the “Poverty in the United States” map

The Power of Working Together

Housing Seniors, One Person at a Time Annual Report 2012
Scroll to top