The Center on Budget and Policy Priorities, in partnership with the Housing Assistance Council, published research on the scope and limitations of federal rental assistance programs. The analysis was conducted using HAC’s data and definition of rural.

For more information and the complete report, visit CBPP’s website. 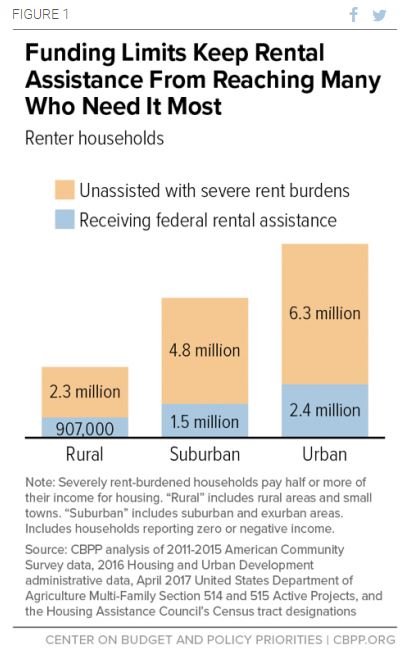 The omnibus provides full renewal funding for HUD programs, including CDBG, HOME, and SHOP, which would have been eliminated by the Trump Administration’s proposal . It also includes $10 million for Section 202 that HUD can use either for new construction – the first such funding since 2011 – or for new Senior Preservation Rental Assistance Contracts.

a. The FY17 Obama Administration budget, like past budget requests, proposed to make SHOP a setaside in HOME. b. Includes the Rural Housing Stability Program, which is not yet operational. c. Tribal VASH setaside. d. $7 million for tribal VASH and $40 million for VASH.

Trump’s signing statement singles out Native American Housing Block Grants. When he signed the FY17 omnibus appropriations bill into law, President Trump issued a statement commenting on some of its provisions. Signing statements are not unusual. This one says certain programs, including Native American Housing Block Grants, minority business development, and funding for historically black colleges and universities, may conflict with the Constitution’s equal protection clause because they “allocate benefits on the basis of race, ethnicity, and gender.” A response from the National American Indian Housing Council points out that these Native American grants “are rooted in the United States’ trust responsibilities and treaty obligations towards Indian Tribes and Native Americans” and are not based on race or ethnicity.

FY18 funding process uncertain. The Trump Administration’s budget proposal, expanding on the outline released in March, is expected in late May. The 2011 Budget Control Act’s spending caps require substantial cuts in both defense and non-defense spending for FY18. The March “skinny budget” did not conform to those caps, and many members of Congress also object to them. It is not clear whether a compromise on spending limits and then an agreement on appropriations details can be worked out before the year begins on October 1, so a continuing resolution may be needed again to keep the government operating.

New Markets Tax Credit allocations available. Apply by June 21 for a portion of the CDFI Fund’s $3.5 billion of NMTC allocation authority. Informational webcasts or conference calls will be announced at https://www.cdfifund.gov. For more information, contact NMTC staff at 202-653-0421.

USDA to continue stakeholder calls on multifamily housing. The calls’ dates and times will be emailed to people who register by contacting Timothy James, USDA, 919-873-2056. Those who have registered in the past do not need to do so again. (These are not the same as the Section 538 stakeholder calls described in the HAC News, 1/19/17.)

Farmworkers are now older and less likely to migrate, research shows. Data from the U.S. Department of Labor’s National Agricultural Worker Survey shows the share of farmworkers in the 20-34 age group has fallen from more than half in 2000 to under 40% in 2016. Only 15% migrate for work. Workers have been employed an average of seven years by their current employers, and earn $15,000-$20,000 annually from farmwork. Many families have more than one wage earner and 25% of farmworkers have at least one nonfarm job, so total median family income ranges from $20,000 to $25,000. “Hired U.S. and California Farm Workers are Aging and Settling: Comparisons from 1990, 2000, and 2016” is in the Western Rural Development Center’s magazine.

Rural Voices considers “Action for a Rapidly Changing Rural America.” The spring issue of HAC’s magazine reports on some of the learning and brainstorming that occurred at the HAC 2016 Rural Housing Conference, with articles based on keynote addresses and issue papers from the conference, along with action recommendations from participant roundtables.

In an update to the issue of maturing rural multifamily mortgages, USDA released a loan level database of all rural multifamily loans and their projected “exit” or maturity date. These data can be accessed on USDA’s data site.

USDA’s Section 515 rental properties were financed with USDA loans that could be amortized over terms as long as 50 years. Once the USDA loan is paid in full, owners are under no obligation to maintain the properties as affordable housing. After the loan matures, tenants living in these properties are also no longer eligible for USDA’s Rental Assistance.

The Housing Assistance Council (HAC) analyzed data on USDA’s multifamily loan portfolio as of the end of March 2016. At that time, there were about 13,830 Section 515 properties with over 416,000 rental units. Nearly two-thirds of the households in these properties receive USDA Rental Assistance. The average tenant household has an income of about $13,600.

USDA calculated a “exit date’ which includes a loan maturity, or estimated payoff date. According to HAC analyses, these projections indicate that an average of 74 properties (1,788 units) per year will leave the program over the next 12 years (2016 – 2027). In 2028, the number properties exiting the program is expected to increase significantly with an average loss of 556 properties (16,364 units) per year through 2032. For the following eight years after 2032, the numbers of properties exiting the program increases for an average loss of roughly 22,500 units per year until peaking in 2040.

To view an interactive map of properties and estimated exit dates for each property visit HAC’s Mapping Rural America page at https://arcg.is/29638UI. 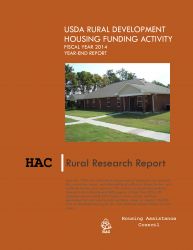 The Housing Assistance Council tabulated data using the USDA Finance Office obligation reports (USDA/Rural Development report code 205c, d and f) and data from the USDA Single Family Housing and Multifamily Housing Divisions in the National Office. The comprehensive report includes tables and maps showing obligation data by program and by State. The report also includes data by fiscal year for each of the programs since program inception.

This document is available by its individual chapters or as one large compiled document. The compilation document is formatted to print as double-sided pages for printers that are able to print on both sides of the paper. Each chapter starts with a divider page which is intentionally blank to maintain consistency throughout the document.

The USDA Rurall Housing Service published a final rule related to multifamily housing loans. A summary of the rule appears below. For complete details, read the Federal Register.

Loans from these funds are used for a wide variety of housing development purposes, for all types of affordable and mixed income housing projects, and for both rental and ownership units.

The Housing Assistance Council tabulated data using the USDA Finance Office obligation reports (USDA/Rural Development report code 205c, d and e) and data from the USDA Single Family Housing and Multifamily Housing Divisions in the National Office. The comprehensive report includes tables and maps showing obligation data by program. In addition, data are compiled for each State’s program activity. The report also includes data by fiscal year for each of the programs since program inception.

This document is available by its individual chapters or as one large compiled document. The compilation document is formatted to print as double sided pages for printers that are able to print on both sides of the paper. Each chapter starts with a divider page which is intentionally blank to maintain consistency throughout the document.

All Files are in PDF format and require Adobe Acrobat Reader.

Questions about the data on this page? Contact Michael Feinberg, michael@ruralhome.org 202-842-8600

If you are having trouble connecting downloading any files on this page, contact Dan Stern, dan@ruralhome.org 202-842-8600.

Back to HAC Home Page