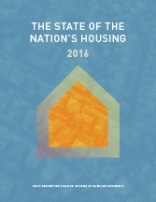 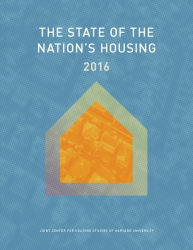 The Joint Center for Housing Studies at Harvard University released the annual State of the Nation’s Housing Report for 2016. The report includes an interactive mapping untility and details the dynamics of housing markets across the country, including an analysis of demographic drivers, rental and owner-occupied housing, and housing challenges for communities across the U.S.

According to the report, the Housing Market has largely recovered from the market collapse of 2008, as new construction rates have increased and the rental housing market continues to expand. However, the report examines how the strengthening market has led to affordability challenges that outstrip the availability of federal housing assistance. The affordability gap has in turn led to a concentration of poverty in the most high need regions and communities.

The report also details ongoing challenges facing non-metro and tribal areas, where poverty rates are higher than the national rate. Substandard housing is particular problem in these areas, where housing in a non-metro area is twice as likely to have incomplete plumbing, and five times as likely in tribal areas. The population in rural areas is also older, and only one-third of the houses can be classified as accessible. Meanwhile, federal housing assistance targeted at rural and tribal areas is limited and has seen a decrease in funding.