What does affordable housing mean to you?

This story appears in the Fall 2014 issue of Rural VoicesFor over 70 years, Leslie Robbins, Jr. proudly handled his home and affairs without outside assistance. As a veteran of the United States Army, he was prepared to serve his country in the Korean War, but was injured in a training exercise just weeks before deployment. An unexpected landmine detonation left him hospitalized for four months. Those injuries still bother him to this day.

“Up here in Maine, you go to work right out of diapers and you work all your life.”

After being released from the hospital, he made his way back to his native Western Maine and started working as a truck driver while growing his family. Leslie was no stranger to hard work. “Up here in Maine,” he said, “you go to work right out of diapers and you work all your life.” The job kept him away from his wife and children, as he traveled to 48 states and Canada, but it was good work for someone who “didn’t have much education.”

Unfortunately, when Leslie reached out to the local Veterans Affairs office (VA) for assistance with his home, he was told that his records had been destroyed in a fire and he could not qualify for any programs. Despite this setback, Leslie managed to build his own home for his family and watch his three children grow up and move out on their own. That home served him well throughout his life, but as he aged and moved into retirement, his home aged too and began to need repairs.

Leslie Robbins, Jr. outside his home in Western Maine

With only Social Security Income to depend on, Leslie was unable to afford the necessary repairs on his home. That is until he came in contact with Western Maine Community Action (WMCA). WMCA helped Leslie secure the necessary financing through a combination of funding from the Housing Assistance Council and the U.S. Department of Energy Weatherization Assistance Program.

With repairs and renovations from WMCA, Leslie now has a new front-entry staircase, new electrical system, a repaired chimney, and his home has been weatherized to better deal with the cold winters in Maine. He says he is saving money on his energy bills and they helped “keep my buns warm in the winter.” Because of WMCA, Leslie is able to age in place, in the same place he has called home for his entire life.

Western Maine Community Action (WMCA): is a social service agency that has been providing services for over 45 years to people living in the western mountain region of Maine. The organization is dedicated to the principle that poverty should not be a permanent condition of people’s lives. 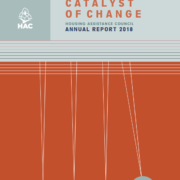 HAC Joins Summit on Addressing the Needs of Aging Veterans

What does affordable housing mean to you? Rural families share their storie...