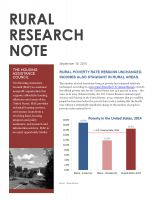 The number of rural Americans living in poverty has remained relatively unchanged, according to a new report from the U.S. Census Bureau. Overall, the official poverty rate for the United States was 14.8 percent in 2014 – the same as in 2013. Released today, the U.S. Census Bureau’s annual report, Income and Poverty in the United States: 2014, estimates that 46.7 million people had incomes below the poverty line in 2014, making this the fourth year without a statistically significant change in the number of people in poverty at the national level.

The Power of Working Together