Rural Research Notes present summary findings from HAC and other research and analyses on social, economic, and housing characteristics of rural Americans. 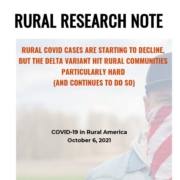 The Housing Assistance Council presents updated data on the COVID-19 pandemic and its impact on rural communities.

As of September 30, there have been more than 6.5 million reported cases of COVID-19 and approximately 114,163 associated deaths in communities outside metropolitan areas. During September, communities outside of metropolitan areas reported more than 870,000 new cases – a 24 percent increase over the month of August. Since the onset of the Delta variant this summer, death rates have been substantially higher in rural places than in metro areas. 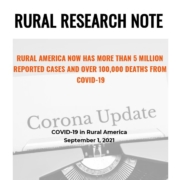 As of August 31, there have been more than 5.6 million reported cases of COVID-19, and approximately 101,741 associated deaths in communities outside metropolitan areas. Between August 1 and August 31, communities outside of metropolitan areas reported nearly 700,000 new cases of COVID-19 – a 291 percent increase over the previous 30-day period. There were 5,122 reported deaths associated with COVID-19 in rural communities in August, which represented a 254 percent increase in deaths from July 2021. Communities outside of metropolitan areas accounted for over 19 percent of all COVID deaths and 16 percent of new cases in August. The dramatic increase in rural cases and deaths mimics national trends related to the ascendancy of the more contagious delta variant. 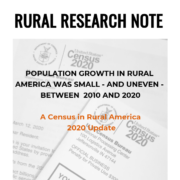 A Census in Rural America 2020 Update

Using Census 2010 and 2020 data, combined with methodology from the Housing Assistance Council’s Rural and Small-Town definition of location, HAC estimates that the rural population only increased by approximately 164,000 residents over the last decade. This population growth accounted for a .3 percent increase in the rural and small-town population. Overall, HAC estimates that approximately 60,551,165 people live in rural communities using the latest Census data. 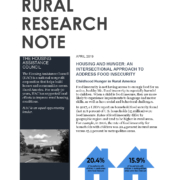 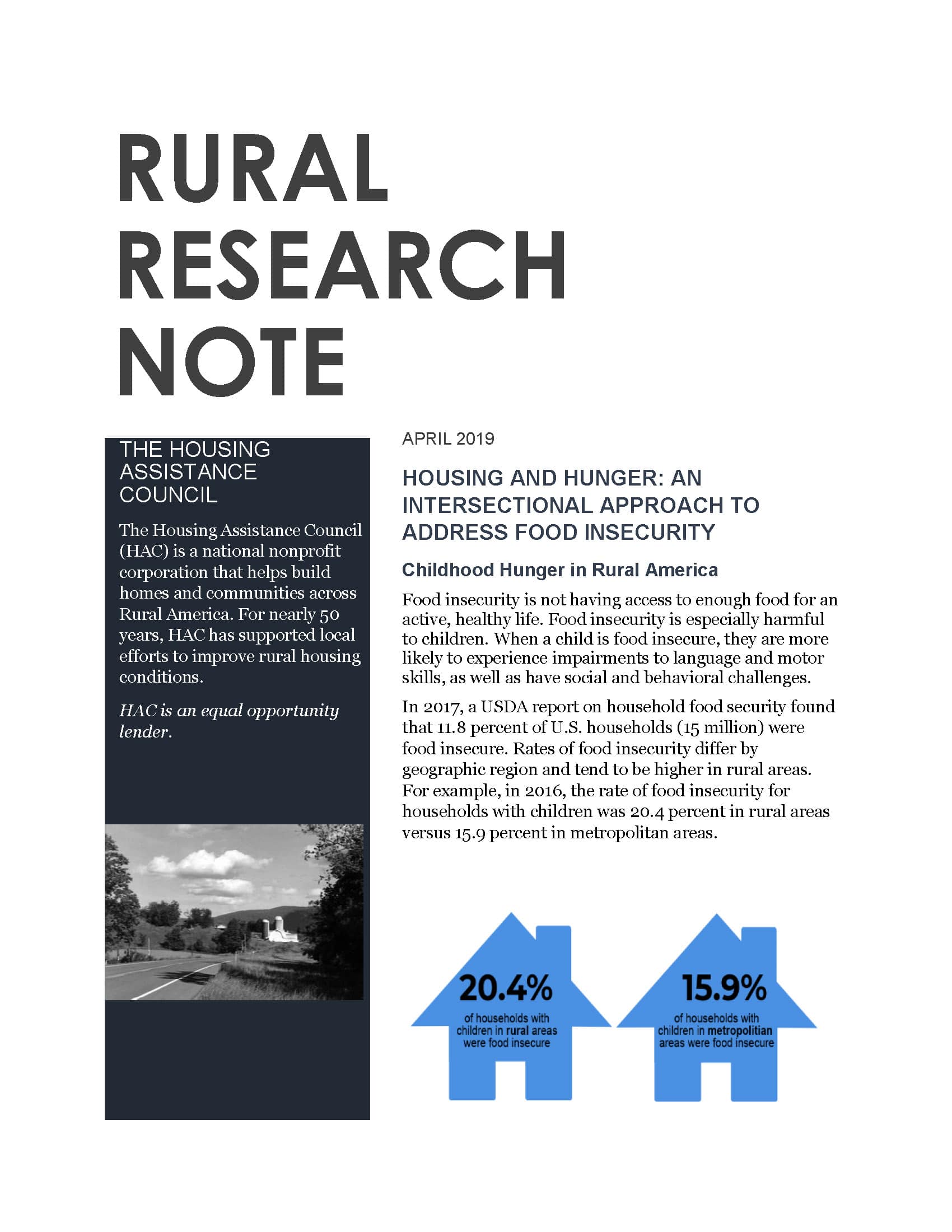 Food insecurity negatively affects childhood development and rural areas have higher rates of food insecurity. The Summer Meals program only serves 1 in 7 eligible students, but an increasing number of USDA multi-family properties serve as meal sites for this program. Stronger and continued collaboration between housing facilities and child nutrition programs will reduce rural childhood hunger during the summer months. 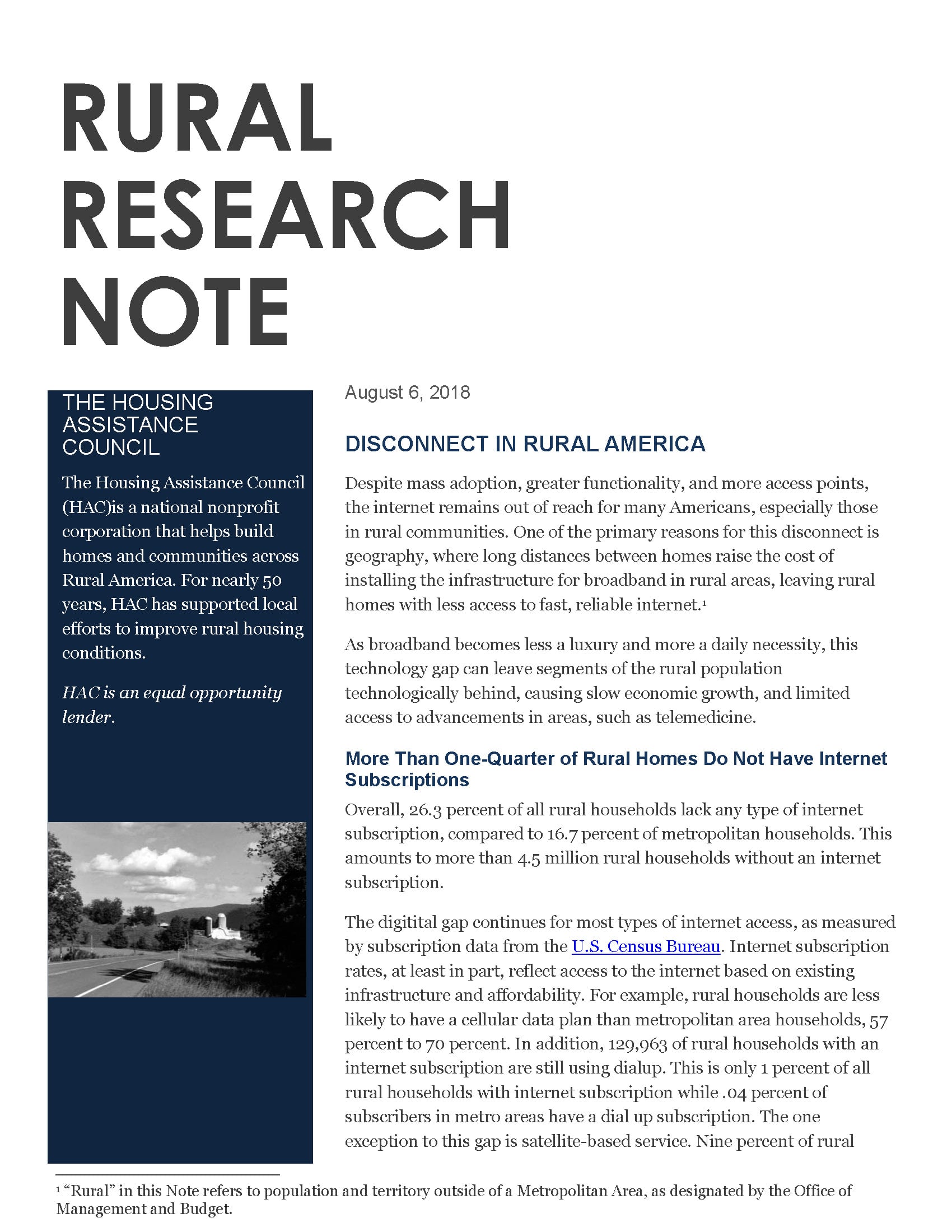 Despite mass adoption, greater functionality, and more access points, the internet remains out of reach for many Americans, especially those in rural communities. One of the primary reasons for this disconnect is geography, where long distances between homes raise the cost of installing the infrastructure for broadband in rural areas, leaving rural homes with less access to fast, reliable internet.

As broadband becomes less a luxury and more a daily necessity, this technology gap can leave segments of the rural population technologically behind, causing slow economic growth, and limited access to advancements in areas, such as telemedicine.

The digital gap applies to most types of internet access, as measured by subscription data from the U.S. Census Bureau. Broadband subscription rates, at least in part, reflect access to the internet based on existing infrastructure and affordability. For example, rural households are less likely to have a cellular data plan than metropolitan area households, 57 percent to 70 percent. The one exception to this gap is satellite-based service. Nine percent of rural 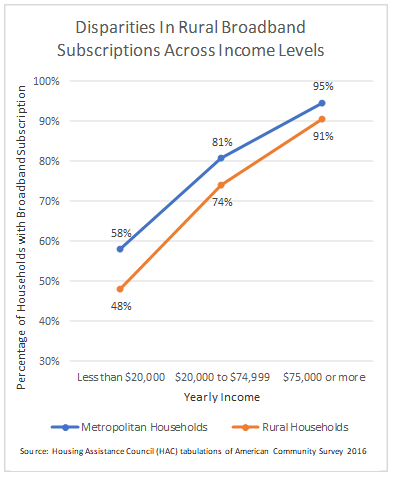 households, compared to 6 percent of metropolitan area households use satellite internet services. Greater isolation and more sparse populations in rural areas likely explain the more common use of satellite technology, where cable or fiber optic services are not available.

The same disparity in connectivity exists at all age ranges as well. Rural residents under 18 years old are less likely to have a broadband subscription compared to their metropolitan counterparts, 84 percent to 89 percent. The trend follows for residents between 18 and 64 years old, 81 percent to 88 percent, and for those 65 years and older, 62 percent to 73 percent.

So, while income and age may exacerbate the disparity in broadband subscriptions, subscription rates in rural areas continue to trail metropolitan areas across the board.

Rural households with access to some type of computing device are more often limited, with access to either a smartphone or a desktop computer, rather than having the capability and benefits of both forms of technology. While seemingly a small issue, fewer devices directly impacts rural households’ ability to take advantage of ever increasing technologies. This means that a rural home buyer with only a smartphone may not be able to obtain detailed information on mortgage products, and a veteran without a smartphone cannot get on the road directions to a VA healthcare facility for an appointment.

What the Disconnect Means

While it may not be surprising that rural households have less broadband access and fewer devices, it can be consequential. Less dense areas where there are large physical gaps in infrastructure is where the internet can be the best utilized. Households without broadband subscriptions are unable to access services effectively, such as online banking and shopping, telemedicine, and more reliable communication.

Investing in broadband infrastructure in rural areas can help diminish the disparities in access between rural and metropolitan households. While initial infrastructure investments may not be deemed profitable by traditional providers currently, small and local municipalities may need to consider creative methods of bringing broadband to their rural communities. 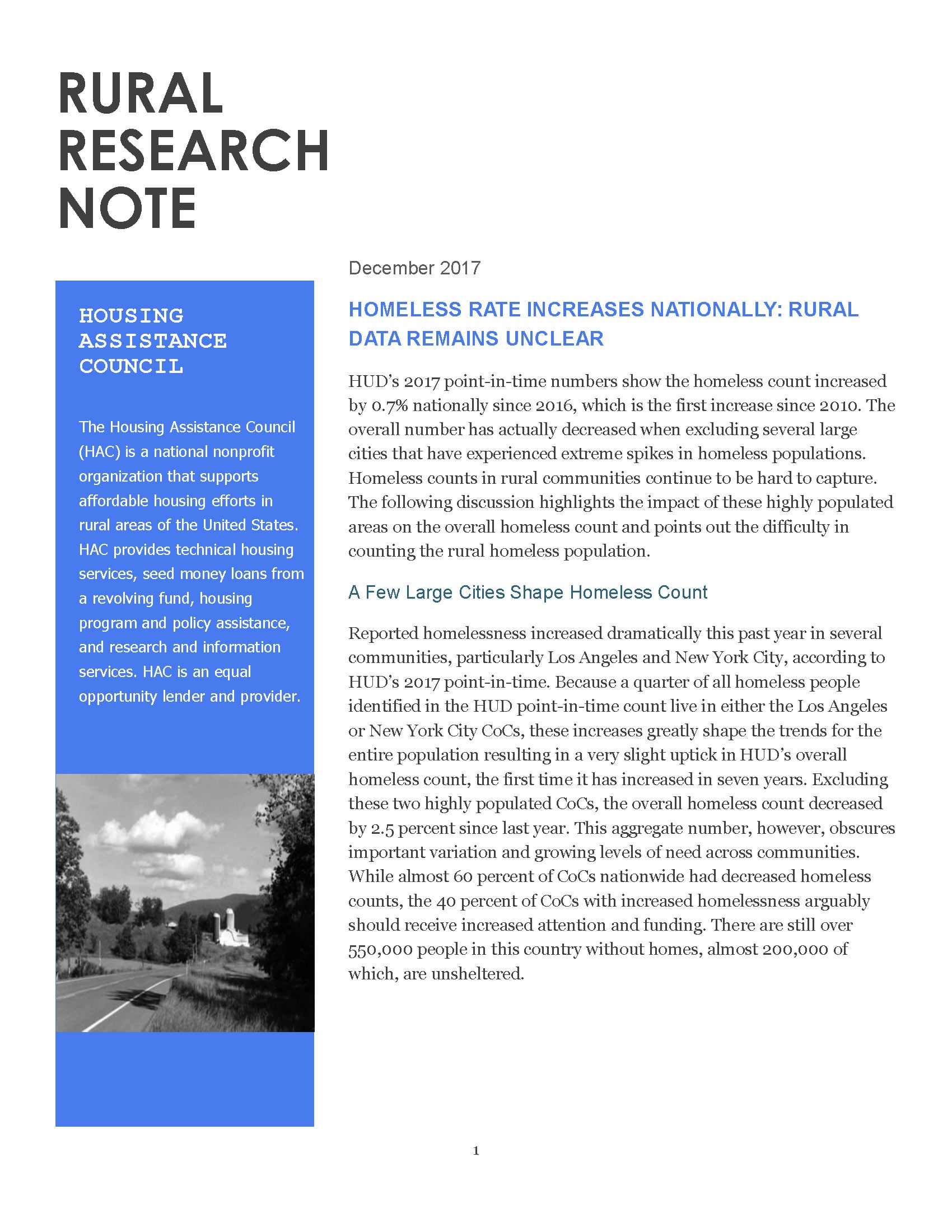 HUD’s 2017 point-in-time numbers show the homeless count increased by 0.7% nationally since 2016, which is the first increase since 2010. The overall number has actually decreased when excluding several large cities that have experienced extreme spikes in homeless populations. Homeless counts in rural communities continue to be hard to capture. The following research note highlights the impact of these highly populated areas on the overall homeless count and points out the difficulty in counting the rural homeless population. 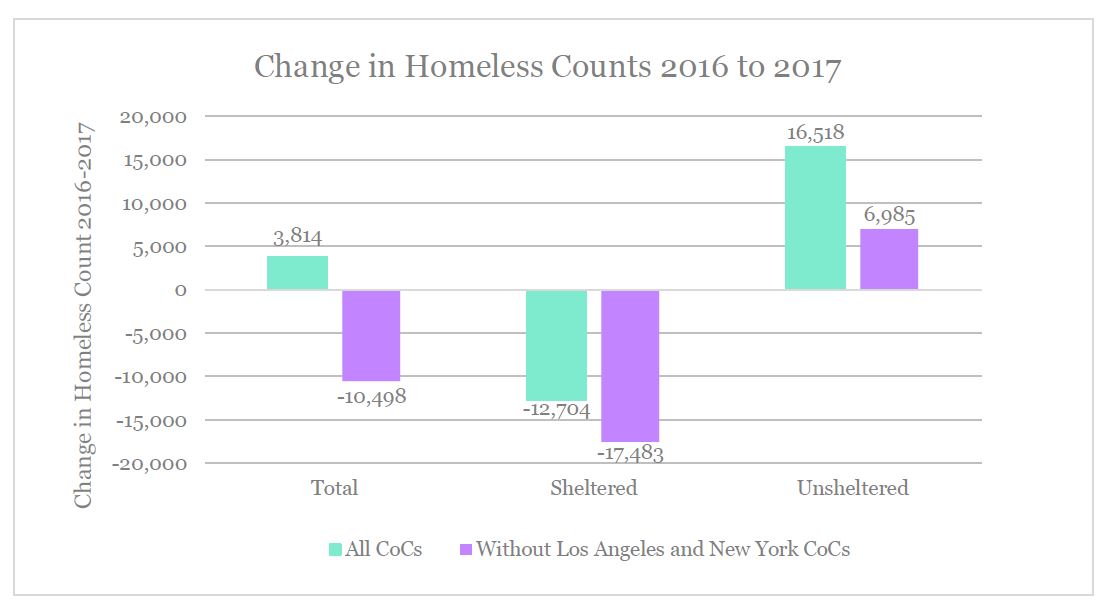 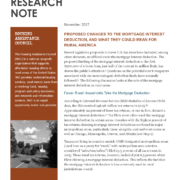 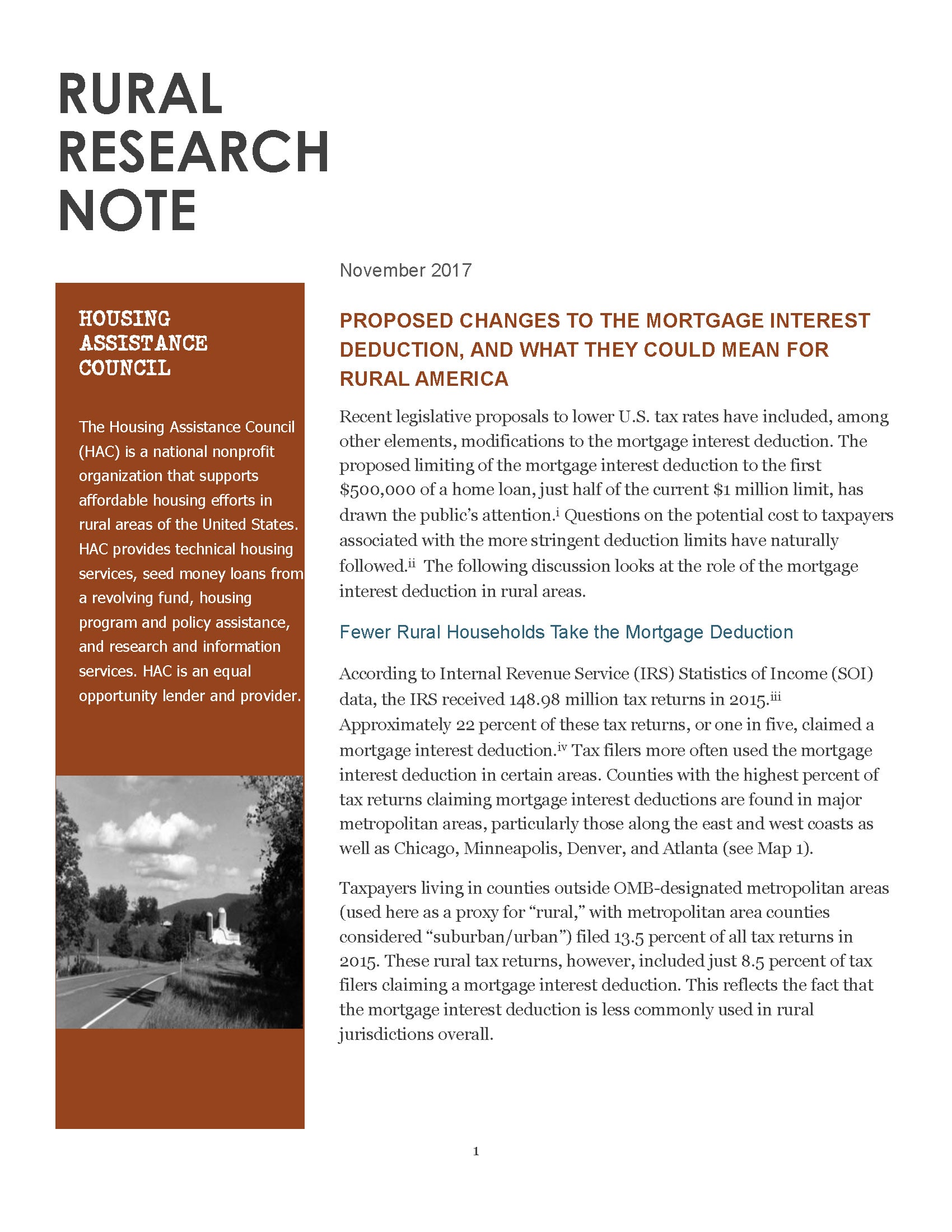 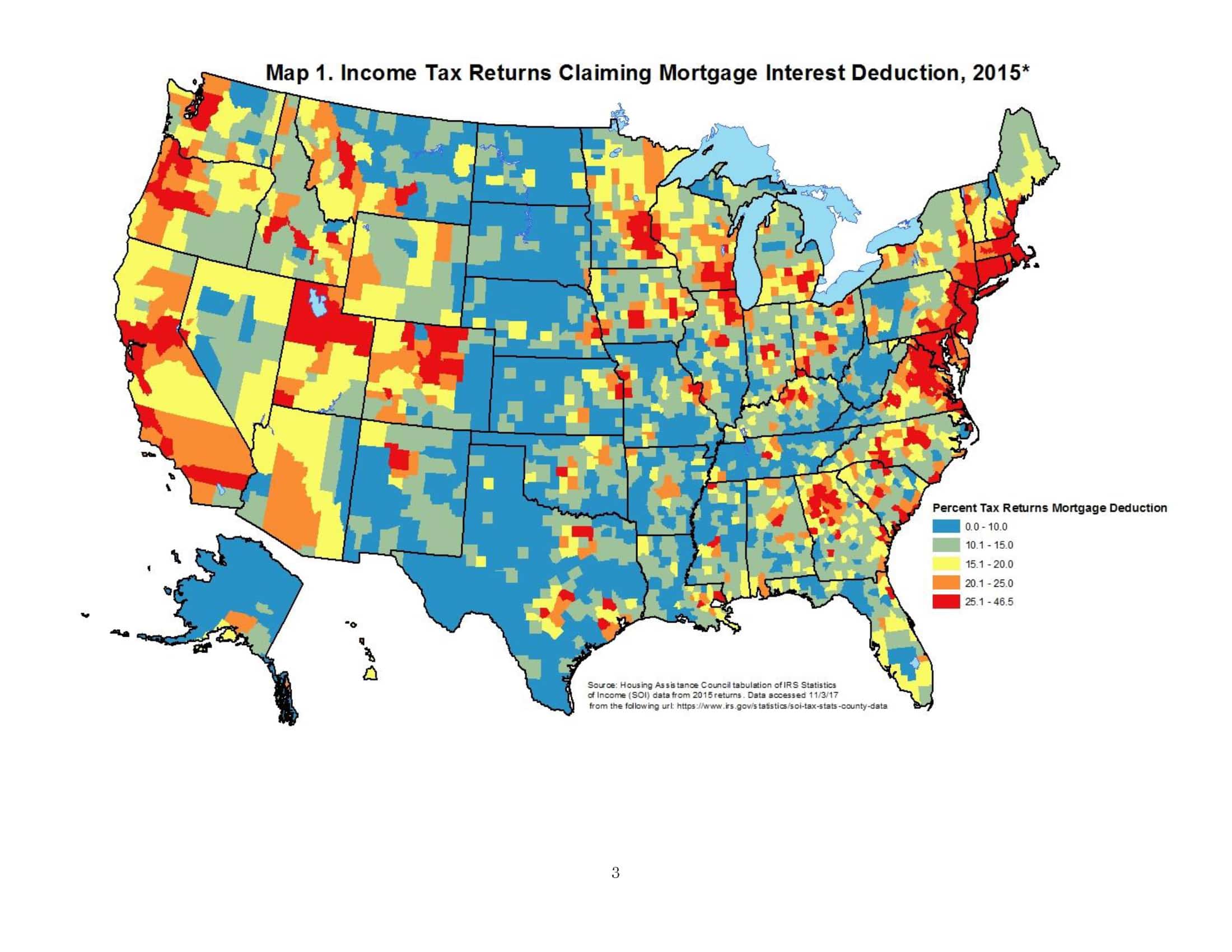 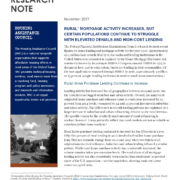 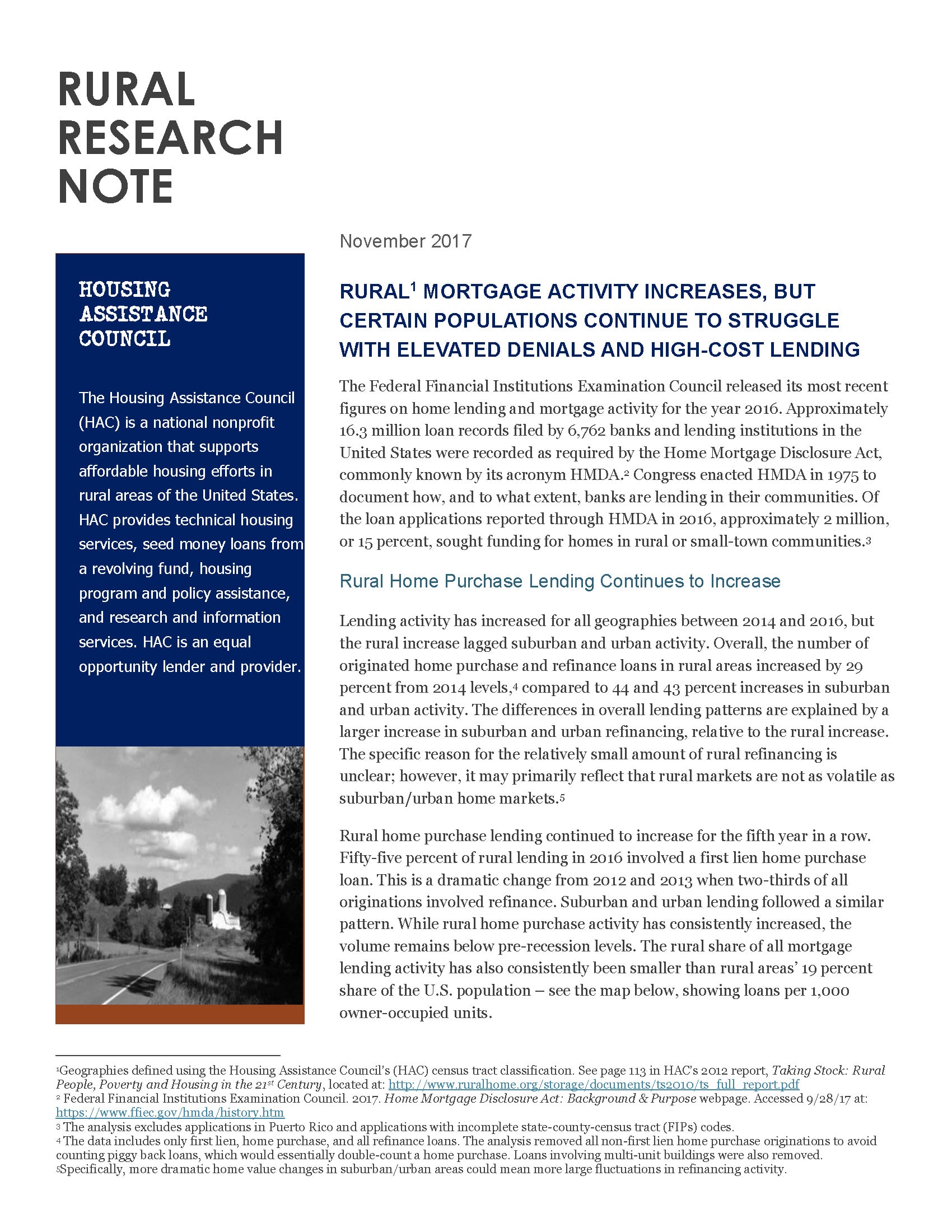 The Federal Financial Institutions Examination Council released its most recent figures on home lending and mortgage activity for the year 2016. Approximately 16.3 million loan records filed by 6,762 banks and lending institutions in the United States were recorded as required by the Home Mortgage Disclosure Act, commonly known by its acronym HMDA. Congress enacted HMDA in 1975 to document how, and to what extent, banks are lending in their communities. Of the loan applications reported through HMDA in 2016, approximately 2 million, or 15 percent, sought funding for homes in rural or small-town communities. 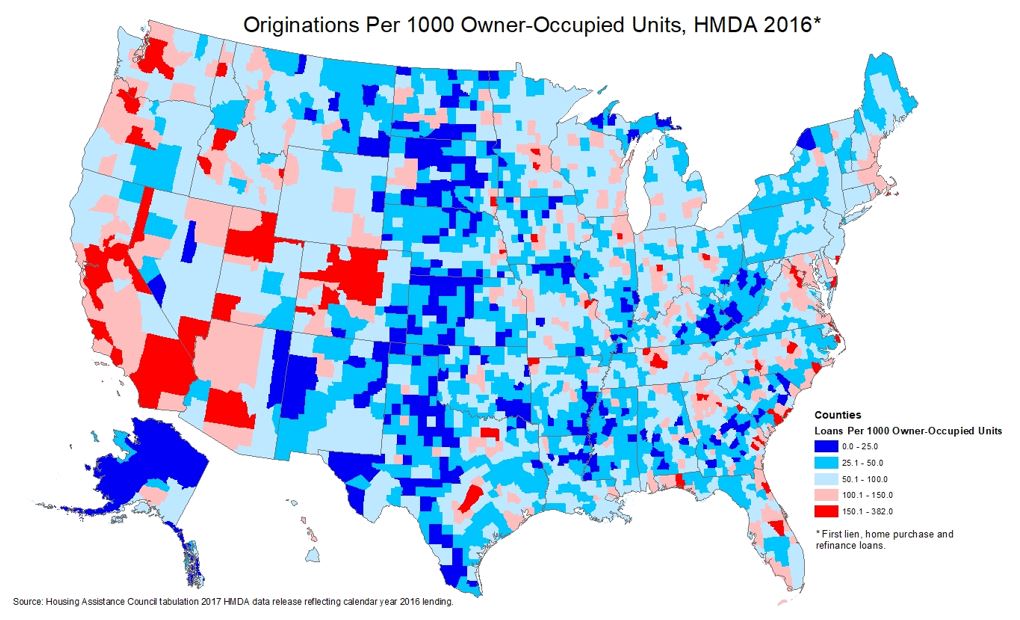 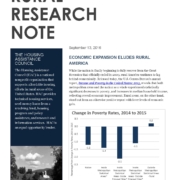 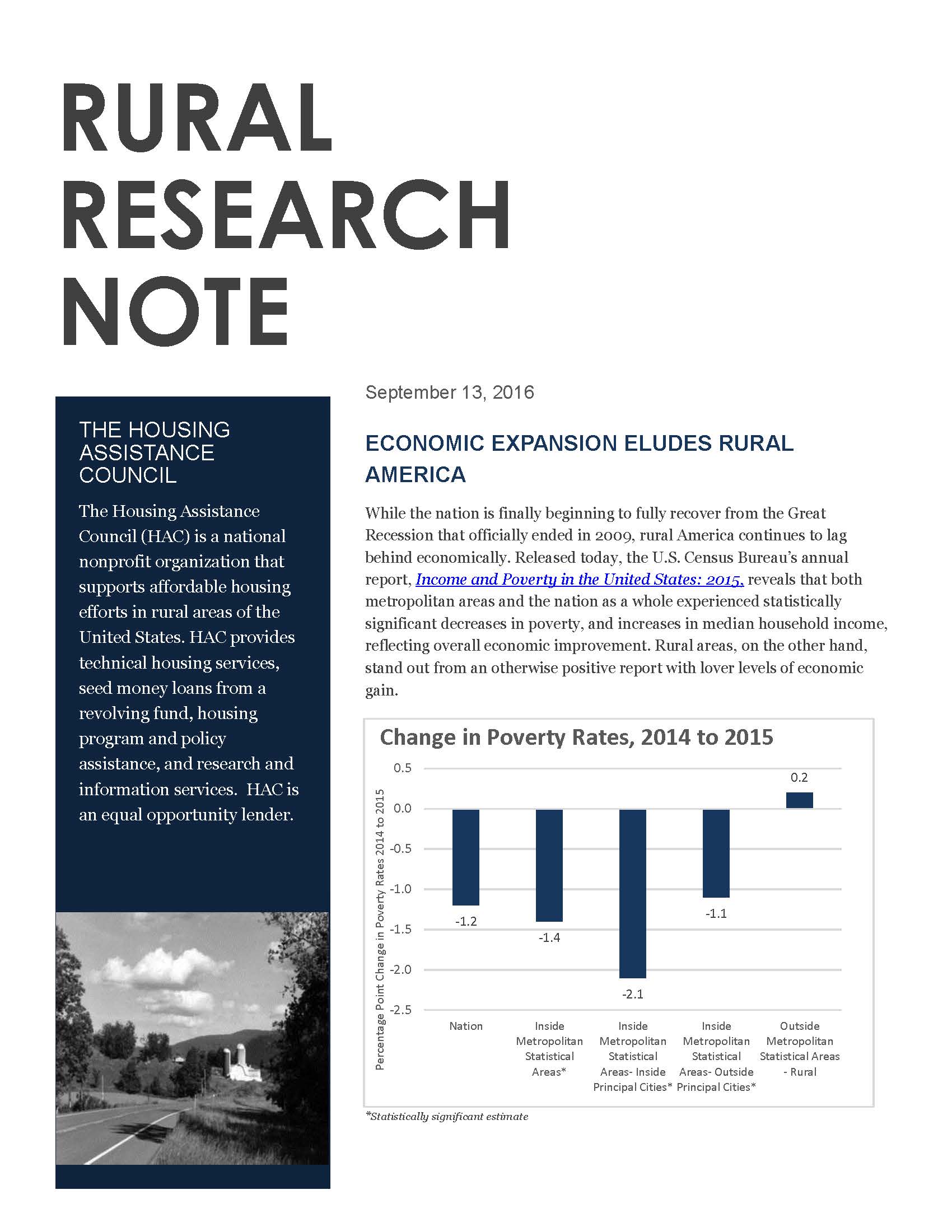 While the nation is finally beginning to fully recover from the Great Recession that officially ended in 2009, rural America continues to lag behind economically. Released today, the U.S. Census Bureau’s annual report, Income and Poverty in the United States: 2015, reveals that both metropolitan areas and the nation as a whole experienced statistically significant decreases in poverty, and increases in median household income, reflecting overall economic improvement. Rural areas, on the other hand, stand out from an otherwise positive report with lower levels of economic gain.

The number of rural Americans living in poverty has remained relatively unchanged, according to a new report from the U.S. Census Bureau. Overall, the official poverty rate for the United States was 14.8 percent in 2014 – the same as in 2013. Released today, the U.S. Census Bureau’s annual report, Income and Poverty in the United States: 2014, estimates that 46.7 million people had incomes below the poverty line in 2014, making this the fourth year without a statistically significant change in the number of people in poverty at the national level.