Update, May 18, 2017: A notice in the May 18 Federal Register invites interested parties to submit comments at www.regulations.gov on the proposed reorganization. The deadline is June 14.

Several members of Congress quizzed Secretary of Agriculture Sonny Perdue about a proposed reorganization plan that would eliminate the position of Under Secretary for Rural Development (RD). The Secretary appeared before the House Agriculture Committee on May 17 to discuss the state of the rural economy, and the hearing covered the wide spectrum of subjects under USDA’s jurisdiction.

Committee members who expressed concerns about the possible demotion of RD issues noted that they viewed the reorganization proposal in light of the request in the Administration’s preliminary budget to eliminate some water/wastewater and business programs. Perdue assured them repeatedly that RD’s program administrators would have more access to him than if the Under Secretary position remained in place. He said they would report to an Assistant Secretary who would be approved by the Senate (as the Under Secretary is), and they would also have direct “walk-in”; access to the Secretary himself. He asserted that he believes rural development is extremely important and therefore wants to be more directly involved in it.

In one of his answers, Perdue tried to summarize RD’s areas of responsibility, citing business, economic development, and utilities. He did not mention housing.

Some Committee members pointed out that USDA did not request public comment on the proposal until after it had submitted the plan to Congress for a 30-day review period. Perdue said he was not familiar with the notice requirements and could not explain why the actions were taken in this order. 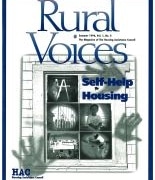