Information available for Hurricane Harvey survivors. A Harvey supplement to HAC’s disaster guide is free on HAC’s website. Resources are offered by federal agencies and programs including FEMA, HUD, USDA, and the LIHTC program.

Congress faces busy September. When Congress returns to work after Labor Day, legislators will need to deal with FY18 appropriations and much more. It still seems likely that FY18 will begin on October 1 with a continuing resolution holding funding at FY17 levels. In September the House will consider a single package comprised of eight of the FY18 appropriations bills, including those for USDA and HUD. House members have proposed numerous amendments, though it is not yet known which will be considered on the House floor. None of these amendments would impact USDA housing programs, some would increase funding for some HUD programs, and others would limit or block funding for some HUD programs. Senate leaders have not announced how they will approach the remaining appropriations work.
It is not clear whether Congress will be able to agree on changes to the Budget Control Act spending caps, as it has done in the past; if it does not, across-the-board cuts in FY18 funding are possible. A recent OMB report calculates that if the current spending limits remain unchanged, the House versions of the 12 annual appropriations bills would result in a sequestration of approximately $72.4 billion in defense programs. The Senate bills would result in a sequestration of approximately $2.0 billion in defense programs and $3.8 billion for non-defense programs.
Before Hurricane Harvey hit, President Trump threatened to allow the government to shut down if appropriations bills do not include funding for a U.S.-Mexico border wall. Responding to concerns that a shutdown would stop hurricane relief efforts as well, the President stated that the two things were “separate.”
In addition to appropriations, the federal debt limit must be raised by the end of September so the U.S. does not default on its debt payments. The debt ceiling itself does not affect spending levels or the federal deficit, but provisions that impact federal programs can be attached to the debt limit legislation. Tax reform, and possibly health care changes, remain under consideration as well, and the National Flood Insurance Program expires September 30. The NFIP’s renewal may be impacted by the Hurricane Harvey flooding; one possibility is a short-term renewal to gain more time for negotiating a longer-term solution.

HUD announces RAD expansion. HUD’s FY17 appropriations law increased the number of public housing units that can be converted to Section 8 vouchers through the Rental Assistance Demonstration. On August 23 HUD published a notice implementing the change. Instead of the previous 185,000 units, 225,000 can now take part in RAD. PHAs on HUD’s waiting list must apply by October 23 to participate. The eligibility and selection criteria will not change. For more information, email rad@hud.gov. The National Low Income Housing Coalition offers suggestions for ways public housing residents can prepare, and links to additional resources.

House and Senate committee reports disagree on ACS. The House and Senate Appropriations Committees have both passed FY18 funding bills for the Commerce Department, which includes the Census Bureau. The Bureau conducts the American Community Survey, now the only source of some data previously collected in the decennial census, including housing and income information. The House report states, “The Committee is very concerned about the burdensome nature of the ACS and directs Census to focus on its core, constitutionally mandated decennial Census activities.” In contrast, the Senate report notes the importance of ACS data, particularly for “Americans who live in small towns and rural areas, as this survey often provides the only reliable and consistent source of information about these communities.” ACS appropriations are not separated from funds for other Census Bureau work, so neither bill provides a specific amount of funding for the survey.

Nominations sought for HUD Secretary’s Opportunity and Empowerment Award. Nominations are due September 8 of communities or plans, programs, or projects that directly result in an improved quality of life for low- and moderate-income residents. The award criteria emphasize how creative housing, economic development, and private investments are used in or with a comprehensive community development plan to build social equity and empower community residents. There is no nomination fee. For more information, contact the American Planning Association, awards@planning.org. 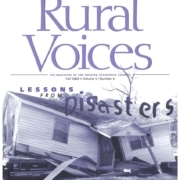 The Fall 2000 issue of Rural Voices addresses some of what can be learned from recent major disasters.

Natural disasters remind us how little control we have over our world -homes and lives can be wiped out in seconds. One year ago, Hurricanes Dennis and Floyd devastated large sections of the eastern U.S., with heavy rains and flooding damaging communities far inland. This summer, news stories have focused on fires in the west. Less dramatic disasters happen all the time -a tornado strikes a single town or a river floods in one county.

The Fall 2000 issue of Rural Voices addresses some of what can be learned from recent major disasters. Preparatory steps to guard against damage are summarized by staff of the Federal Emergency Management Agency’s Project Impact, which helps to make communities disaster resistant. An experienced architect from Texas presents specific design and construction tips for wind resistance. A Kentucky state official describes her agency’s role in recovering from serious flooding. A Minnesota rural infrastructure expert suggests elements of a manual to guide emergency procedures. And a North Carolina advocate examines the challenges and successes of that state’s ongoing efforts to recover from last year’s hurricanes.

A great deal of additional information is available for rural communities to prepare for and recover from these kinds of disas-ters and others. Most of the articles in this issue suggest sources of further advice, and most of it is available free.

A key theme running through all these articles is the importance of advance planning and preparation. Rural communities can exert some control after all, either to reduce damage or to hasten recovery after a disaster.