This story appears in the 2015 Spring Edition of Rural Voices

As a community development officer with a regional bank, I worked to begin mortgage lending on Tribal Trust Lands. I thought the process would be very similar to ‘fee simple’ lending and started getting clients approved for the mortgage. Well, this went downhill really quickly. I determined that we would need mortgage codes in place for this process.

When you are dealing with Tribal Sovereignty, there are many issues that can come up. A mortgage code must be in place and accepted by the different branches of the federal government in order for mortgage lenders to have any type of recourse. These codes lay out the policies and procedures for leases, eviction, lean priority and foreclosure.

What I had not considered is that many of our tribal leaders did not understand that this process would never endanger lands belonging to the tribe. Two different tribes made this process difficult for me. One of the tribes required 100 percent approval from the tribal council before the code could be passed. This approval process involved presentations over several years to the council before we could secure the necessary votes. The challenge was the elders’ mistrust of the system and fears they might lose their land to these mortgage lenders. I spent many long days at the tribe getting this done.

I thought the process would be very similar to ‘fee simple’ lending and started getting clients approved for the mortgage. Well, this went downhill really quickly.

The other tribe provided a similar challenge, but I was working directly with a tribal member who had already been approved for a loan, rather than a full council. It still took us three years to get the codes in place before we started building. To this day, there are still a few tribes that do not have mortgage codes in place.

This issue was further complicated by separate documentation for the home sites. We were mainly dealing with HUD, and we had a lease that covered their requirements. Little did I know, the HUD lease documentation was not sufficient for USDA or VA administered loans.

We then had to write leases that included the concerns of each department of the government. Yet another complication were National Environmental Policy Act (NEPA) requirements. Again, we encountered the challenge of different reporting formats for each department of the government. Today, things have changed and the process is more streamlined. But improvements are still needed.

We worked with HUD, USDA, VA and the Bureau of Indian Affairs (BIA) to adopt the same format on the NEPA documents. Most of our leases are accepted by each department, but we still have challenges with wording in some of the leases. I can now close a loan within six to nine months which is far better than my first one which took me three years. I know this still sounds like an incredibly long time, but we are making progress and the effect of having affordable housing in Indian country is positive.

Looking to the Future: Youth and Housing in Rural America 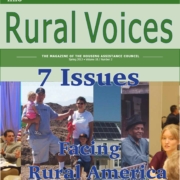 Always Improving, One Misstep at a Time Trust AND Verify
Scroll to top