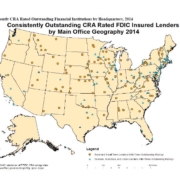 The Housing Assistance Council’s report exploring the Community Reinvestment Act (CRA), entitled Making CRA Work in Rural America: Finding “Outstanding” Financial Institutions, takes a closer look at lenders who consistently excel in meeting their CRA obligations. Is this a common phenomenon? Are there things which these lenders have in common? This research begins a discussion about how we can learn from those lenders which already do an outstanding job of providing credit to all of their service areas.

The Community Reinvestment Act (CRA) requires federally insured lenders to make credit available in all areas where they do significant business or take deposits. The CRA charges federal bank regulators with evaluating depository institutions on a regular basis to ensure they are meeting this obligation.

The overwhelming majority of financial intuitions earned Satisfactory CRA ratings on their most recent CRA examinations. Regulators awarded Outstanding ratings to only 9 percent of lenders. Consistently Outstanding-rated lenders are important because they serve as examples of institutions that continually exceed CRA requirements in serving all portions of their service area. While making up a majority of all FDIC-insured depository institutions, little is known about rural lenders in general and even less about how they fulfill their CRA obligations.

This report looked more closely at the lenders who consistently received Outstanding ratings on their last three examinations. The data show that this is an uncommon occurrence, only 4 percent of lenders are consistently outstanding, and these banks most often large asset, urban headquartered institutions. While the inclusion of distressed and underserved census tracts in lender service areas was associated with being consistently rated outstanding, the analysis found no association with being headquartered in rural areas. Additional research of these lenders is needed to better understand how they are able to successfully serve all communities. 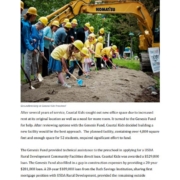 Little is known about rural community development activity for which lenders earn CRA credit. While anecdotal evidence suggest such projects are uncommon, most rural CRA discussions focus on the need to increase rural activities. HAC’s Making CRA Work in Rural America: Partnerships and Opportunities for Rural Community Investment report serves to increase our knowledge of how CRA can work in rural areas by focusing on four successful rural community development projects.

“The CRA will make a good project better, but not a bad project good”
– Greg Hohlen, Bremer Bank

While the CRA-related activity was an important part of each case, the underlying fundamentals of the project were sound making these efforts a win-win for the bank and the community.