American Indian tribes are building more housing units after enactment of the Native American Housing Assistance and Self-Determination Act of 1996 (NAHASDA) but housing conditions are substantially worse among American Indian households than other U.S. households. These are some of the findings of three new comprehensive reports of tribal housing needs just released by the U.S. Department of Housing and Urban Development (HUD) and the Urban Institute.

Special circumstances on tribal areas — remoteness, lack of infrastructure, complex legal issues and other constraints related to land ownership — make it extremely difficult to improve housing conditions in some areas, according to the reports. Based on the assessments of doubled up households and the number of severely distressed housing units in tribal areas, it is estimated that 68,000 more units are needed to replace severely inadequate units and to eliminate overcrowding in tribal areas. While tribes have been able to use NAHASDA funds effectively, their purchasing power has been eroded by inflation.

Key findings from the Housing Needs of American Indians and Alaska Natives in Tribal Areas report:

Key findings from the Mortgage Lending on Tribal Land report:

Key findings from the Housing Needs of American Indians and Alaska Natives in Urban Areas report: 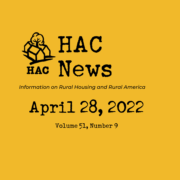