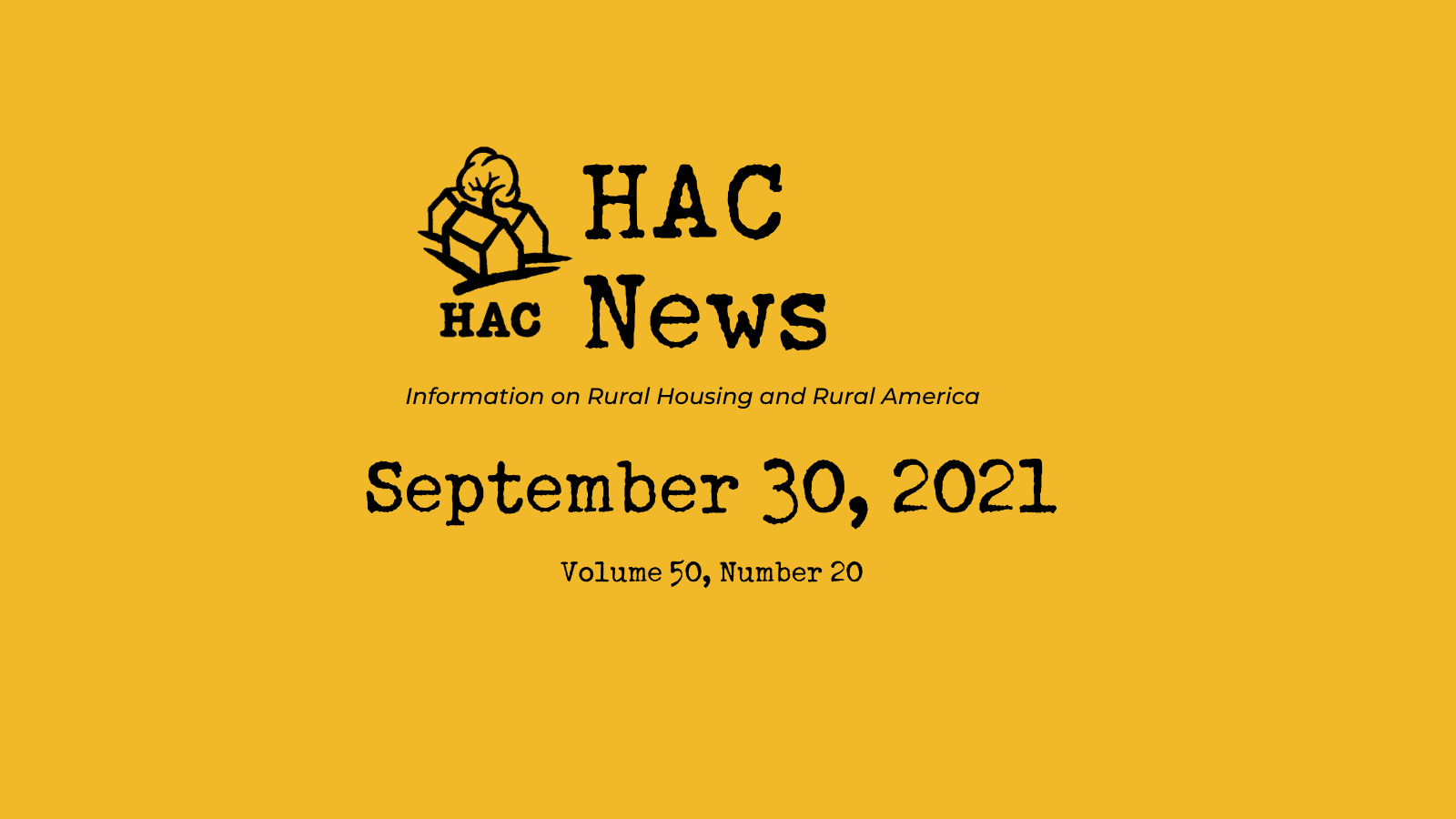 Funding for early FY22 likely to pass on Sept. 30.

Congress is expected to pass a continuing resolution on September 30 to keep the government open until December 3, holding programs at their FY21 funding levels. Regular appropriations bills, including those for USDA and HUD, remain in limbo. Three other major legislative efforts are also ongoing: the increase in the U.S. debt limit; the bipartisan infrastructure bill (H.R. 3684); and the $3.5 trillion reconciliation bill that covers social programs including housing (H.R. 5376).

Some federal housing programs’ pandemic-related flexibilities were set to expire on September 30 but have been extended.

The Treasury Department has released a general description of its approach to reallocating some Emergency Rental Assistance funds from states and local governments that have not spent them to others with stronger distribution records. A September 24 letter to ERA grantees says Treasury is developing detailed guidance to govern its determinations about what funds will be moved and where they will go. It promises consultation with tribes and U.S. territories before reallocating any of their funds. Distribution of ERA funds has increased every month, but a large portion of the total has not yet been spent.

HUD and the U.S. Interagency Council on Homelessness are inviting mayors, city and county leaders, tribal nation leaders, and governors to work with them in House America: An All-Hands-on-Deck Effort to Address the Nation’s Homelessness Crisis, using American Rescue Plan funding to address homelessness through a Housing First approach.

Comptroller of the Currency nominee announced.

President Biden has nominated Saule Omarova, a Cornell University professor, to serve as Comptroller of the Currency.

On September 15 the House Financial Services Committee reported out H.R. 5195, which would reauthorize the Native American Housing Assistance and Self-Determination Act. The bill must be passed by the full House next.

HAC’s National Rural Housing Conference is scheduled to take place virtually on November 30-December 3, 2021. With an exciting and full schedule of workshops and new virtual gathering spaces, the conference offers attendees a premier opportunity to learn from experts and connect with the entire affordable housing industry. Be on the lookout for a registration announcement. We look forward to connecting with you this December!

From 2010 to 2020 the rural Hispanic population increased by roughly 1 million people, or 19.7%. Source: HAC tabulations of the U.S. Census Bureau’s 2010 Census of Population and Housing and 2020 P.L. 94-171 Redistricting Data. A Rural Research Brief on race and ethnicity is available  here.

Shared Prosperity: Driving Change Towards an Equitable Rural Economy, to be held October 13, will explore the positive economic and social potential that comes with improving racial equity in rural places. This is the latest in the Rural Opportunity and Development (ROAD) Sessions, virtual exchanges co-designed and hosted by the Aspen Institute Community Strategies Group, HAC, the Rural Community Assistance Partnership, Rural LISC, and the Federal Reserve Board.

The recording and materials from HAC’s September 28 webinar titled “Build Smart” Webinar Series Part 2: ‘Scaling Down’ to Address Rising Costs are now posted online. A recording of the Citizens’ Institute for Rural Design’s September 15 webinar, Models and Practices for Meaningful Community Engagement, has also been posted.

The Community Facilities Housing Specialist identifies and engages community stakeholders and provides direct technical assistance to rural organizations that are developing facilities such as parks, community centers, public libraries and childcare centers. This is a two-year position and is eligible for telecommuting.

USDA is creating an Equity Commission to advise the Secretary of Agriculture by facilitating identification of critical USDA programs, policies, systems, structures, and practices that contribute to barriers to inclusion or access, systemic discrimination, or exacerbate or perpetuate racial, economic, health and social disparities. Nominations for committee membership are due October 27. For more information, contact Dewayne L. Goldmon, USDA 202-997-2100.

HUD has updated its policies and procedures for the administration of HUD-Veterans Affairs Supportive Housing Section 8 vouchers. The changes add designated service providers to the definition of VA medical centers and provide new waivers and program flexibilities as well as additional general guidance. For more information, contact Ryan Jones, HUD, 202-708-0477.

The Occupational Safety and Health Administration and other federal agencies announced they will take steps to protect workers better in hot environments and reduce the dangers of heat exposure. These efforts will impact workers in agriculture, construction, and other sectors, as well as vulnerable populations such as children and seniors.

The U.S. is becoming more racially diverse – and so is rural America.

Race and Ethnicity in Rural America, a new Rural Research Brief from HAC, presents an initial review of characteristics, trends, and issues related to race and ethnicity in rural America. According to the 2020 Census, 74.8% of the rural population is White non-Hispanic, compared to 57.8% for the U.S. as a whole. Hispanics (who may be of any race) comprise 10.4% of the rural population, Black residents 7.4%, and American Indians or Alaska Natives about 2%. The number of rural residents identifying as multiracial (of two or more races) increased an astounding 148% from 2010, consistent with the national trend.

Children living in counties outside metro areas are more likely than metropolitan children to benefit from the recent temporary expansion of the child tax credit, according to a data analysis by the Daily Yonder. About 49% of rural children are likely to receive increased child tax credits compared to about 39% in metro areas.

In the Seattle Times, Housing in Alaska Can’t Survive Climate Change. This Group is Trying a New Model reports on the Cold Climate Housing Research Center, which has built 22 prototypes incorporating Indigenous wisdom and 21st-century technologies that can withstand the state’s unpredictable climate. These homes will replace those originally imported from the Lower 48 and incompatible with the extreme weather conditions of Alaska.

Is the Housing Crisis Over in Rural America?

Rural Seniors and Their Homes: Planning for a Rapidly Aging Rural America

The United States is Becoming More Racially Diverse – And So is Rural...