by David Lipsetz, CEO of the Housing Assistance Council

It was the mid-1970s. Gerald Ford was in office. CDFIs like the Housing Assistance Council (HAC) were just getting started. And Peggy Wright was growing up in Forrest City, Arkansas.

Forrest City is part of Arkansas’ long-struggling Delta region, where rich soil rarely led to riches for the largely African American population toiling in the fields. Housing conditions were dire, and indoor plumbing was hardly commonplace. Within a few years, Peggy had grown up and joined the Arkansas Delta Housing Development Corporation (ADHDC). Despite the barriers of the times, she rose to the position of housing director at ADHDC, running a “Self-Help” housing model which allows those of modest means to put forth hundreds of hours of sweat equity toward construction of their own homes.

Read the complete post on the CDFI Connect Blog. 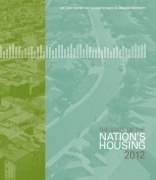 State of the Nation's Housing 2012