Tax bills will move to conference committee. The Senate passed its tax bill early in the morning on December 2. Now the Senate and House must name members of a conference committee, which will try to determine how to resolve the differences between their bills and develop a measure that both houses can pass.

Another continuing resolution expected for federal funding. The CR currently keeping the federal government operating will expire on December 8, and the House is considering a second CR to last through December 22. At that point, a third CR may be needed to carry spending into January, and a full-year CR may also be a possibility. FY18 appropriations bills have not been completed, and there is no agreement on lifting the spending caps imposed by the Budget Control Act. Both the House and the Senate are scheduled to adjourn for the year on December 15. Additional disaster funding is likely to be considered separately, not incorporated into a CR.

Rural lending increases, denial rates and high-cost loans remain higher for minorities. A new HAC research note reports that rural mortgage lending continued to increase in 2016, with 55% of rural lending involving first lien home purchases, a dramatic change from 2012 and 2013 when two-thirds of rural originations involved refinance. USDA’s Section 502 guarantee program accounted for 9-12% of rural purchase loans in the last three years. Mortgage denial rates for rural African-American and Native American applicants were 37% and 34%, higher than the rates for the same populations in suburbs and cities.

Violence Against Women Act information offered for managers and residents of assisted rentals. HUD regulations, Q&As, and other resources for multifamily properties are collected online. Guidance related to USDA rental properties is in AN 4814.

Two-thirds of Puerto Ricans requesting disaster aid live in neighborhoods with poverty over 40%. A National Low Income Housing Coalition analysis of FEMA data shows that 70% of Puerto Ricans registering for FEMA assistance after Hurricanes Irma and Maria are homeowners and 30% are renters, with a large majority of both living in very high-poverty areas; 21% of owner registrants and 46% of renter registrants have incomes under $10,000. Puerto Rico’s median household income in 2016 was $20,078.

Population fell in small, remote nonmetro counties, 2010-2015, and grew in larger ones. The Daily Yonder found almost no nonmetro population growth in the first half of this decade, with numbers falling in almost two-thirds of nonmetro counties, but increasing slightly in counties containing cities of 10,000 or more. Total nonmetro growth in 2010-2015 was 0.3%, while the U.S. population grew 3.1%. Foreign-born residents comprised much of the nonmetro growth and are now about 4% of nonmetro residents, compared to 18.2% in the largest U.S. cities. 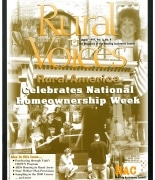 Proposed Changes to the Mortgage Interest Deduction, and What They Could Mean...