CORDRAY CONFIRMED AS CFPB DIRECTOR. After resolution of a partisan stand-off, on July 16 the Senate confirmed Richard Cordray as director of the Consumer Financial Protection Bureau.

DEMARCO FACES LITIGATION OVER NATIONAL HOUSING TRUST FUND. The National Low Income Housing Coalition, the Right to the City Alliance, and several individuals filed suit on July 9 against Ed DeMarco, acting head of the Federal Housing Finance Agency, claiming he has violated the law by not requiring Fannie Mae and Freddie Mac to finance the trust fund created by the Housing and Economic Recovery Act of 2008.

SENATE FARM BILL INCLUDES RURAL HOUSING DEFINITION EXTENSION, HOUSE DOES NOT. All places currently eligible for USDA housing funds would remain eligible until the 2020 Census – so long as their populations remain below 35,000 – under Section 6202 of S. 954, passed by the Senate on June 10. H.R. 2642, passed by the House on July 11, is silent on the subject. A National Rural Housing Coalition petition is available online.

OMB ISSUES 2013 CIRCULAR A-133 COMPLIANCE SUPPLEMENT. Comments are due October 31 on the annual supplement to this circular, which governs audits of states, nonprofits, and local organizations receiving federal funds. For more information contact a funding agency.

CFPB UPDATES LIST OF RURAL OR UNDERSERVED COUNTIES FOR 2014. The list is used for several different regulations. Some counties have been added and about 50 have been removed. Contact CFPB, 202-435-7700.

HUD DATA SHOWS DECLINE IN PUBLIC HOUSING, INCREASES IN VOUCHERS AND TAX CREDITS. HUD recently released its Picture of Subsidized Households data for 2009 through 2012. A National Low Income Housing Coalition analysis found that since 2009 the average median income of households living in subsidized housing has dropped. The number of public housing units fell nationwide, while the numbers of housing choice vouchers and Low Income Housing Tax Credit units increased. Voucher recipients and public housing residents had similar economic situations, but heads of voucher households were more likely to be single mothers and less likely to be elderly.

OP-ED DESCRIBES SEQUESTRATION’S IMPACTS ON PINE RIDGE. Former North Dakota Senator Byron Dorgan wrote in the New York Times on July 10 that funding cuts are reducing the already inadequate resources for housing, health care, and education on the reservation, and recommended tribes be exempt from sequestration.

BIPARTISAN POLICY CENTER HOUSING COMMISSION TO HOLD REGIONAL FORUMS. Free and open to the public, the events on August 13 in Dallas, August 22 in Ketcham, ID, and August 27 in Columbus, OH will feature panels discussing issues including the state of the housing market, affordable rental housing, rural housing, and reform of the U.S mortgage system. Register online at https://bipartisanpolicy.org/events/upcoming. 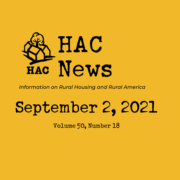 USDA to Use FY12 Section 515 Funds for Prepayment Incentives, No New Construction