House committee passes FY17 USDA spending bill. On April 19, the House Appropriations Committee approved a bill that provides steady or increased funding levels for USDA’s rural housing programs. It increases Section 523 self-help technical assistance funding to $30 million and raises Section 502 direct to $1 billion. Section 521 Rental Assistance and Section 542 vouchers would receive amounts that, according to the Administration’s budget, will allow for renewal of all current aid, new RA for new farmworker housing properties, and new vouchers for tenants in properties leaving the Section 515 program for any reason, including mortgage maturity. It also includes Administration language that would extend voucher eligibility and allow USDA to set priorities for voucher distribution.

The Committee’s report tells USDA to provide it with a list of criteria used to define ‘‘rural in character’’ in determining what places are considered rural and therefore eligible for housing program funding.

Senate subcommittee addresses FY17 HUD spending. The Senate Transportation-HUD Appropriations Subcommittee approved a bill on April 19. The measure’s text will not be released until the full committee considers it on April 21, but the committee did announce the bill provides $950 million for HOME and $300 billion for CDBG. The subcommittee’s top Democrat, Sen. Jack Reed (D-RI), released a statement supporting the bill. HAC will post updates at ruralhome.org when available.

RUS offers rural broadband loans, guarantees, and grants. Nonprofits, for-profits, and governments or tribes can apply for Community Connect grants by June 17. Those entities as well as coops can apply for Farm Bill Broadband Loans and Loan Guarantees by July 7. For either program, contact Shawn Arner, RUS, 202-720-0800.

Jobs Plus funds available. PHAs with at least 200 non-elderly-only households are eligible, and the deadline is June 13. Contact HUD staff.

Homelessness data examined at national and state levels.The State of Homelessness in America 2016, by the National Alliance to End Homelessness, examines recent trends and also those from before the Great Recession to the present. For example, although doubled-up households fell 9% from 2013 to 2014, the number of poor people living doubled up was 52% higher in 2014 than in 2007.

Typical low-income household’s expenses exceeded income in 2014. A Pew Charitable Trusts Issue Brief on “Household Expenditures and Income” shows that by 2014 the median expenditures of working-age households had returned to pre-recession levels, but income did not. In 2004, the typical household in the lowest one-third of income levels had $1,500 of income left over after expenses, but in 2014 their expenses exceeded income by $2,300. Housing costs for those with incomes in the lowest third grew by 50% from 1996 to 2014. (Figures were adjusted for inflation). 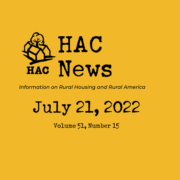