This story appears in the 2015 Spring Edition of Rural Voices

The Housing Development Alliance takes a calm but straightforward approach to mistakes: admit them, fix them, and learn from them in hopes of not making the same mistake twice.

Who’s to blame doesn’t really matter; the fact is we had a flawed procedure that allowed this mistake to happen.

There is a lot of wisdom in that carpenter’s statement.  If you do something, especially new things, you are going to make mistakes. It’s inevitable. Don’t worry about it. In fact, if you aren’t making mistakes, you probably are not pushing yourself or your organization hard enough. As the Executive Director of the Housing Development Alliance, I certainly don’t encourage mistakes, but I do try to embrace them when they happen. So the question isn’t if you will make mistakes, but the question is how you and your organization handle them. Playing the blame game, pointing fingers at others, jumping up and down on someone’s desk, yelling, and the like aren’t useful responses and do nothing to help you avoid making similar mistakes in the future.

At the Housing Development Alliance we take a relatively calm and direct approach to mistakes. We admit them, we fix them, and we learn from them in the hope of not making the same mistake twice.  Since the only thing better than learning from your own mistakes is learning from someone else’s, here are two examples of mistakes and the lessons we have learned from them.

Lesson 1 – My House Is Backwards

We had just finished framing the exterior walls on Mickey’s house when she called me; “My house is backwards, the door is on the wrong side.” I called the construction supervisor who swung by the site to check it out. He called me back and said it was built just like the plans. Then I checked with our assistant director who works with customers on house plans. He gave me a copy of the plans she had picked out. Turns out the two sets of plans were mirror images. One had the door on the right; one had the door on the left. Mickey had changed her mind several times during the process and somehow or another, our staff had gotten out of sync. To this day, I still don’t know “who’s to blame.”  Did the assistant director forget to let the construction supervisor know about a change?  Did the construction supervisor forget that the assistant director had told him to change it one more time? Or was it something completely different like an email that got lost in cyberspace? Who’s to blame doesn’t really matter; the fact is we had a flawed procedure that allowed this mistake to happen.

We realized that the process is confusing and that people often hear what they want to hear.

The first thing we did was fix the problem. We got lucky that 1) Mickey noticed the problem before the roof was framed (otherwise we would have had to pull trusses off) and 2) that the house was a rectangle. So the fix was pretty simple, we just cut out a few studs, and moved some windows and doors. The second thing we did was to figure out how to make sure it never happened again. Our solution was to improve our preconstruction conference. We made several changes. First, we now have the homeowners sign the final plan.  When possible, we do this at the site so the client can easily visualize where the house will sit, where the doors/windows will be, where the driveway will be, and such. The construction supervisor ensures that the signed plan is what gets built. We also explain to the customer that from this point forward, their point of contact is the construction supervisor and only he has the authority to approve any changes to the plan and that any changes must be made in writing.  I am happy to report that, 150 plus houses later, we have not made this mistake again.

Lesson 2 – Make Sure They Hear What You Say

I was conducting a final inspection on a USDA Rural Development (RD) Section 504-funded home rehabilitation with the local USDA staff. The inspection was going great — the homeowner loved the work and couldn’t be happier. Then the RD staff asked the homeowner to sign the check to pay us.  That’s when the homeowner said, “But they’re not done yet. They haven’t done the back bedroom floor.”  The RD staff and I both pulled out the scope of work attached to the contract. To my relief (or so I thought), the scope didn’t mention the back bedroom floor.  The USDA staff member explained to the homeowner that it was not part of the contract. That’s when the homeowner got upset, “But I needed that fixed. They measured it; they made a drawing of the room. We even talked about what floor covering I wanted. This isn’t fair!”

I knew instantly what the problem was. Many home repair clients request more work than they can afford. We estimate all the repairs a homeowner requests, then work with them to establish the final scope of work. We look at the homeowner’s wants, but also prioritize based on importance of the repair. In this case, the roof work had been prioritized over the floor repair. It doesn’t make sense to fix a floor only to have water from a leaky roof drip all over it. But somehow in the process, the homeowner didn’t understand that the bedroom floor wasn’t going to get fixed.  I’m sure at the loan closing, we reviewed the scope of work with the homeowner. And yes, the homeowner should have realized that the back bedroom wasn’t on the scope of work. So we could have just chalked this up to a customer not paying attention. But placing blame on the customer isn’t the best approach for improving word-of- mouth marketing.

We realized that the process is confusing and that people often hear what they want to hear. Furthermore, the loan closing takes place in the RD office where it’s harder for the homeowner to visualize the repairs. To prevent a recurrence of the mistake, we bought a big red stamp and added an extra walk through. A day or two before we start a rehab, one of our staff members visits the home and does a thorough walkthrough of the scope of work with the homeowner. They review each scope of work item and explain what is going to be repaired and how w
e are going to repair.   Then we stamp the scope of work with a red stamp that explains that only the work on the write up will be completed. Furthermore, the stamp explicitly says that no other work – even work previously talked about, estimated, or measured – will be completed. This process has proved very useful and has helped us avoid several similar misunderstandings with other homeowners.

Scott McReynolds the Housing Development Alliance, has worked in the rehabilitation and construction of affordable housing in Eastern Kentucky since 1992. Since 1996, the Housing Development Alliance has completed over 200 homeownership units, completed over 500 repairs for low income homeowners, and developed 36 rental units. Scott serves on the board of the Federation of Appalachian Housing Enterprises, the National Rural Housing Coalition, the Appalachian Arts Alliance and the Community Foundation of Hazard and Perry County, KY. 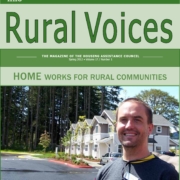 Is the Housing Crisis Over? And how did it impact rural America?

The Gray Panthers of El Dorado, Amador, and Placer Counties: How the Good Guys Finally Won