HAC’s Analysis of Out of Reach 2014, a publication of the National Low-Income Housing Coalition.

The National Low Income Housing Coalition (NLIHC) released its annual Out of Reach report for 2014 on March 24th. This is the 25th anniversary of the report known for defining the Housing Wage; the wage one must earn in order to afford a rental unit at Fair Market Rent (FMR). NLIHC estimates the 2014 national Housing Wage needed to afford the FMR for a two bedroom unit ($984 per month) is $18.92.

What About Rural Renters? 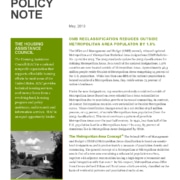