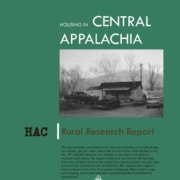 The Appalachians’ plentiful natural resources, including coal, natural gas, and timber, played a key role in the growth of the United States during the 19th and 20th centuries and continue to be vital to the nation’s economic well-being. The region’s distinctive culture and rich heritage have also left their mark on the American experience both culturally and economically. Despite its cultural distinction, the Appalachian region is more commonly known for its economic challenges. High poverty rates, poor housing, and limited economic opportunities have persisted for generations.