As of the end of January, USDA obligated 46,512 loans, loan guarantees, and grants totaling about $6.2 billion. This is $641 million or 3,927 more obligations than the same time last year.

The Section 502 Guaranteed loan program, the largest of the Single Family Housing programs, obligated $6.0 billion (44,101) in loan guarantees. Most of the obligations occurred in October and November when monthly obligation rates averaged about $1.9 billion (nearly 14,000 loans per month). Activity in December and January slowed somewhat to about $1.1 billion (8,000 loans) per month.

The Section 504 Repair and Rehabilitation programs obligated 425 loans representing $2.3 million and 848 grants representing $5.1 million. Section 504 activity has slowed from the levels in October and November ($630 thousand/100 loans per month and nearly $1.5 million/245 grants per month) compared to December and January ($520 thousand/100 loans and about $1 million/180 grants.)

Section 521 Rental Assistance obligations total 103,369 units representing $466 million, about $23 million more dollars than last year at the same time. Nearly 45 percent of the year to date obligations were done in October. Since that time obligations levels have varied from month to month. 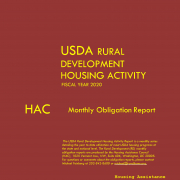 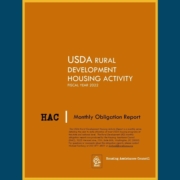