Republican poverty plan released. The poverty reduction portion of A Better Way: Our Vision for a Confident America, released by Speaker of the House Paul Ryan on June 7, focuses on work requirements, increased program control at the state and local level, measurable results, and reduction of fraud and abuse. As an example of programs that could be consolidated, the plan states that “the rental assistance program of the Rural Housing Service (RHS) is similar to HUD’s Housing Choice Voucher program,” without noting that rural RA is tied to RHS-financed properties. House Democratic Leader Nancy Pelosi (D-CA) and Democratic poverty task force chair Rep. Barbara Lee (D-CA) issued critical responses. Other portions of A Better Way address national security, the economy, and – to be released June 16 or later – separation of powers, health care, and tax reform.

USDA RD launches two-tiered income limit pilot. For the Section 502 direct and guaranteed programs and Section 504 loans and grants, 23 states and territories will use HUD’s four-person income limit to qualify households with one to four people, and HUD’s eight-person income level for households with five to eight people. Intended to address situations where low income limits keep families from qualifying, the change will allow more families to qualify for the programs. Contact an RD state office.

Administration objects to Senate’s proposed FY17 funding for 2020 Census preparation. On June 14 the Obama Administration threatened to veto S. 2837, the FY17 Commerce/Justice/Science appropriations bill, for several reasons, including inadequate funding for development of design changes to save money in carrying out the 2020 Census. The bill is being considered on the Senate floor this week. The House version, H.R. 5393, has not yet been taken up by the full House.

Nine new Promise Zones include four tribal/rural zones. On June 6 the Administration announced its final Promise Zone selections, which include the Spokane Tribe of Indians in Washington, the Pride of the Great Plains Promise Zone (led by the Turtle Mountain Band of Chippewa Indians) in North Dakota Southwest Florida, and Eastern Puerto Rico.

HUD proposes mobility for CoC renters. Comments are due August 15 on an interim rule that would allow some recipients of Continuum of Care tenant-based rental assistance to choose housing outside their CoC’s geographic area. It also offers some regulatory exemptions when a program participant moves to flee domestic violence, dating violence, sexual assault, or stalking. Contact Norm Suchar, HUD, 202-708-4300.

FEMA offers guidance on disaster recovery program. Comments are due August 1 on a draft Individuals and Households Program Unified Guidance describing the policies for the IHP, which includes housing aid. The guidance is intended to serve as a comprehensive resource for states, territorial and tribal governments, and other entities that assist disaster survivors. A separate guide will be available for survivors. Contact Johnathan Torres, FEMA, 202-212-1079.

Research analyzes factors for unstable housing among former prisoners. The National Poverty Center at the University of Michigan found that higher earnings and social support from parents and romantic partners were the most effective buffers against residential insecurity among former prisoners, while forced moves to correctional facilities correlated with future residential instability. “Residential Instability among the Formerly Incarcerated” reports that parolees moved an average of 2.6 times per year, while housing experts define unstable housing as one or more moves each year.

Number of families with children receiving HUD rental aid falling. The Center on Budget and Policy Priorities reports in “Rental Assistance to Families with Children at Lowest Point in Decade” that the number of families with children receiving such aid has fallen by over 250,000 (13%) since 2004, while need has risen. The total number of households receiving HUD rental assistance rose slightly between 2004 and 2015, probably because some continue receiving aid after their children have grown up or left home (in about half of these cases, the household heads were disabled or elderly by 2015), and because new vouchers have been targeted primarily to homeless veterans and people with disabilities.

Please nominate national or local rural housing leaders for HAC awards! Nominations are due September 30 for the Cochran/Collings Award for national rural housing service and the Skip Jason Community Service Award. The honors will be presented at the National Rural Housing Conference, November 29-December 2. Complete the online nomination form to be posted on HAC’s website by June 17. Questions? Contact Lilla Sutton, HAC, 202-842-8600. 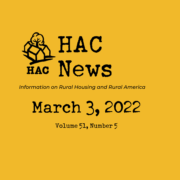