On August 2 President Trump signed H.R. 3877, the Bipartisan Budget Act of 2019, passed by the House on July 25 and the Senate on August 1. The measure raises the 2011 Budget Control Act’s spending caps for FY20 and 21, though the total for non-defense discretionary programs (which includes housing) is lower than the total approved by the House for FY20. The Senate will begin marking up its FY20 appropriations bills when it reconvenes after Labor Day.

Apply by November 4 for grants to revitalize severely distressed public and/or HUD-assisted housing properties. Eligible applicants are local governments or tribes and PHAs, nonprofits or for-profits that own HUD-assisted housing and apply jointly with local governments or tribes, whether they have received previous Choice Neighborhoods Implementation Grants or not. For more information, contact HUD staff.

Politico obtained and published a proposal HUD has developed to change a 2013 regulation governing fair housing discrimination claims that are based on discriminatory impact without proof of discriminatory intent. The new provisions would require the charging party to prove several new aspects of a claim. The proposal is currently under review at OMB and is not officially available. When it is published in the Federal Register a 60-day comment period will begin.

The Home Depot Foundation, working with HAC, has awarded a total of $300,000 to ten local nonprofits around the country to build or preserve housing for veterans in rural America. HAC CEO David Lipsetz said, “Together we build the capacity of local organizations to assist more veterans across rural America. The enduring service and sacrifice of our nation’s service women and men earns them the right to be called heroes and to have a safe and decent place to call home.”

HAC examines the definition of colonias.

Prior approval was needed to move ERS and NIFA, says USDA Inspector General.

USDA’s Inspector General conducted a review and concluded that USDA has the legal authority to relocate the Economic Research Service and the National Institute of Food and Agriculture, but congressional approval was required for USDA to expend funds for the relocation. USDA’s Office of General Counsel disagrees, arguing that the law requiring approval is unconstitutional, and says the department will not request congressional consent. Reps. Steny Hoyer (D-MD) and Eleanor Holmes Norton (D-DC), who requested the IG investigation, issued a statement saying USDA must wait for approval.

HUD announced on August 2 it plans to appoint a Federal Financial Monitor to oversee the disbursement of disaster recovery funds to Puerto Rico, citing the territorial government’s “alleged corruption, fiscal irregularities and mismanagement.” Disaster funds for states impacted by recent storms will be released before funds for Puerto Rico and the U.S. Virgin Islands.

RuralSTAT. Between 2015 and 2017, approximately 37% of all small dollar home loans (less than $75,000) were originated in rural areas. For more data and information on mortgage lending in your community, visit HAC’s Rural Data Portal. Source: HAC tabulations of 2015-2017 Home Mortgage Disclosure Act Data. 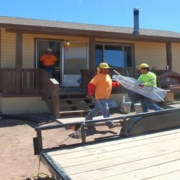 A Message for Veterans Day

Rural Voices: 25 Years: A Foundation for the Future