In December, USDA operated under a Continuing Resolution (CR) which provided funding through December 11, 2014 based on last year’s funding levels. A final appropriations bill was passed and signed into law on December 16, 2014. Most rural housing programs received funding levels similar to FY 2014. Section 523 TA grants increased by about $2.5 million. The MPR demonstration program decreased about $3 million. Section 542 Vouchers decreased by about $5.6 million.

As of the end of December, USDA obligated 36,912 loans, loan guarantees, and grants totaling about $4.9 billion. This is 6,052 more obligations than the same time last year.

The Section 502 Guaranteed loan program, the largest of the Single Family Housing programs, obligated $4.8 billion (35,186) in loan guarantees. Obligations slowed down somewhat, at least for the month of December.

For the Section 502 Direct program, there have been about $79.8 million (681 loans) nearly doubling the total from the first two months of the fiscal year but still less than nine percent of the total appropriated amount. Compared to this time last year, obligations of Section 502 Direct loans are about $14 million (139 loans) higher. Very low-income (VLI) loan obligations as a percentage of the total dollars obligated for the program decreased slightly to 36.3 percent. 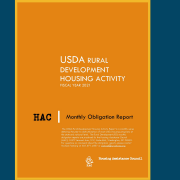