This will only impact extremely low-income households with adjusted annual incomes of less than $2,000. These are the absolute poorest households residing in RD housing. They typically do not have a regular source of income. RD indicates this requirement will affect about 42,000, or 10 percent, of the households living in RD rental housing…

Through my work researching housing for rural seniors, two things have become evident: first, rural America is older than the nation overall, and second, aging in place is the best option for seniors. “Aging in place” refers to older adults living independently in their current residences or communities for as long as possible. The vast majority of rural seniors own their own homes, so this often means remaining there; it can also be accomplished, however, by moving to a more manageable dwelling (such as a smaller apartment).

Numerous reports have proposed that aging in place… Read more

In November, theWashington Postpublished an article entitled“Too Much of Too Little”about recipients of the Supplemental Nutrition Assistance Program, formerly known as food stamps, in Hidalgo County, Texas, one of the fastest growing and poorest places in the nation. The article highlighted families who are forced to choose between affordable yet unhealthy foods that keep their families fed throughout the month or healthy options that are less affordable and may not feed a family for as long. Low-income Americans dependent upon SNAP are often forced to shop “quantity over quality” in order to stretch paltry food budgets throughout the month. As a result, more and more people who do not have enough food to eat are facing obesity and diabetes at alarming rates.

After declining by more than half from 2003 to 2011, the number of rural mortgage applications increased by 19% last year. And the number of actual mortgage loans issued rose 27% from the previous year, according to data collected under the Home Mortgage Disclosure Act (HDMA).

Of the loan applications reported through HMDA in 2012, approximately 2.4 million, or 16%, were for mortgage loans in rural or small town communities.

Rural homelessness differs from urban and suburban homelessness. The image of an individual sleeping on the street, clearly visible to those passing by, is much less frequent in rural America.

Literal homelessness, or the condition of living on the street or in a shelter, does exist in rural America, but due to the geographic vastness of most of these areas and a lack of centralized services and resources, it is much more infrequent.

It’s been a very long time since I saw the movie “Dr. Zhivago,” but I can remember clearly the noisy crowd the doctor finds in his family mansion when he comes home from war. The family is being forced to share their home with a dozen other families, each occupying one room.

I would hate to live that way. But on a policy level it makes some sense, well, without the overcrowding. If we divided the available space in U.S. homes by the number of people, wouldn’t there be an appropriate number of square feet per person?

Sure, forcing people to share their space would make everyone a little uncomfortable, but wouldn’t that be better than having some people live without electricity or pay more than half their income for housing every month? Just temporarily, until we find a way to provide decent, affordable, separate living spaces for everyone.

Can’t find affordable housing where you live? Just move to wherever the housing is. Rural Americans have long been told to “move to town” to improve their housing situations.

The late Clay Cochran, one of the founders of the modern rural housing movement, called this Metropollyanna: the belief that eventually everyone will move to the city and live happily ever after.

It is not uncommon to hear politicians, pundits, and policymakers question the value of social services and public spending in rural parts of the United States where populations are small and resources are limited. This idea came up a couple of months ago in a LinkedIn discussionabout a Rooflines post titled “What Does the Push for Transit Oriented Development Mean for Rural Areas?” One commenter responded: “It means people will have to live in more population-concentrated, urban-proximate areas.”

Unfortunately, but not unexpectedly, the Obama administration’s rural housing budget continues trends that were evident in the last several budget requests.

The guiding principle seems to be, as it is for “safety net” programs generally, reducing spending rather than meeting needs.

The USDA’s flagship rural housing efforts have long been direct loan programs: Section 502 for homebuyers and Section 515 for those who provide rental housing. Like past Obama administration budgets, the FY14 request emphasizes USDA’s loan guarantees rather than direct lending. The guarantee programs—Section 502 guaranteed for homebuyers and Section 538 for rental housing—are “budget neutral” because participants pay fees that cover the programs’ costs. They carry higher interest rates, however, and therefore serve residents with somewhat higher income levels than those using the direct loan programs.

What Does the Push for Transit Oriented Development Mean For Rural Areas?
by Leslie Strauss, HAC 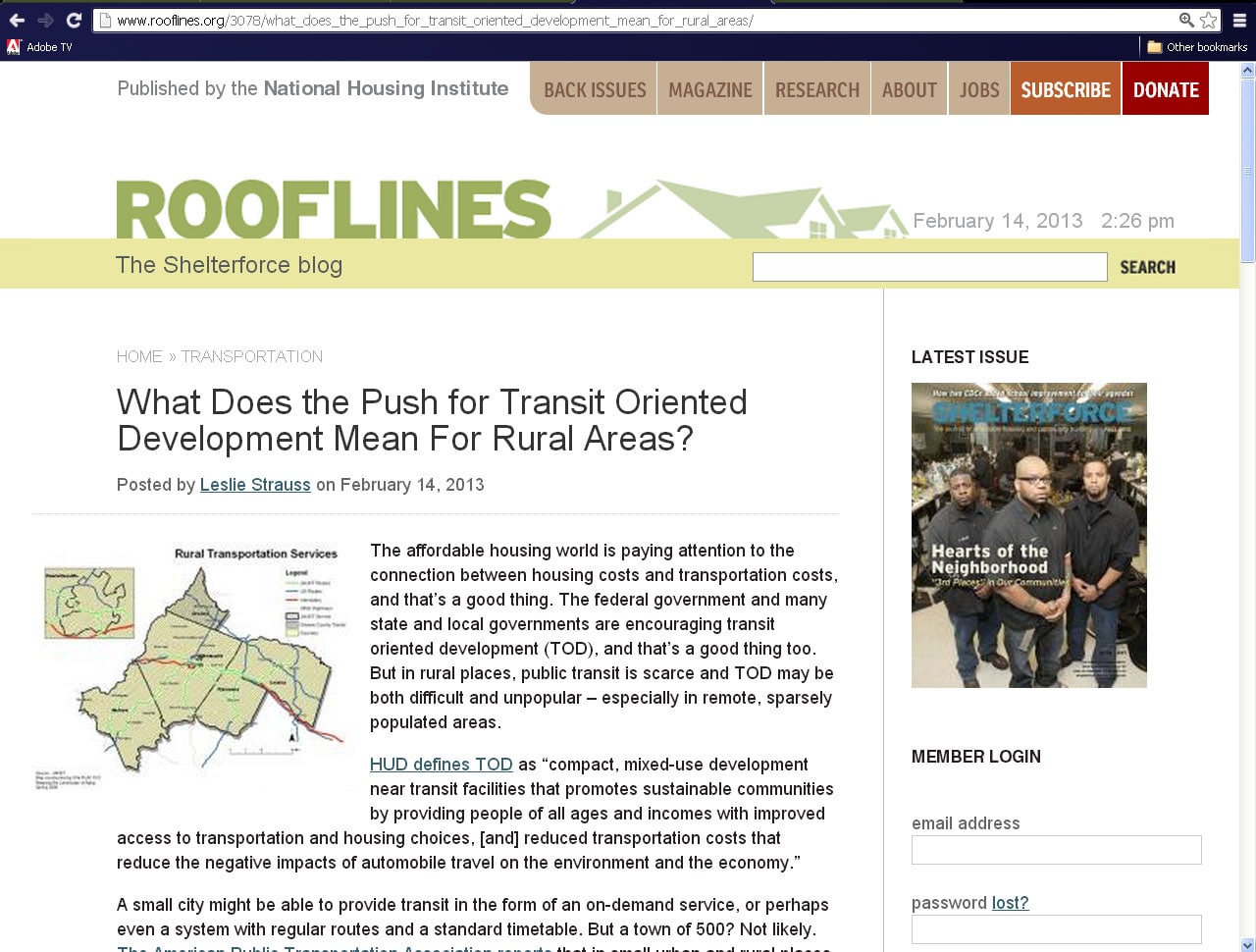 The affordable housing world is paying attention to the connection between housing costs and transportation costs, and that’s a good thing. The federal government and many state and local governments are encouraging transit oriented development (TOD), and that’s a good thing too. But in rural places, public transit is scarce and TOD may be both difficult and unpopular – especially in remote, sparsely populated areas.

HUD defines TOD as “compact, mixed-use development near transit facilities that promotes sustainable communities by providing people of all ages and incomes with improved access to transportation and housing choices, [and] reduced transportation costs that reduce the negative impacts of automobile travel on the environment and the economy.”

A small city might be able to provide transit in the form of an on-demand service, or perhaps even a system with regular routes and a standard timetable. But a town of 500? Not likely.The American Public Transportation Association reports that in small urban and rural places, 41 percent of residents have no access to transit and another 25 percent live in areas with below-average transit services. To provide transit oriented affordable housing development in those places, new transit systems could be created – if funding could be found. Alternatively, residents would have a choice: move to affordable housing created near transit, or live where they prefer to live but without housing assistance.

The Illinois Housing Development Authority takes a more restrictive approach in providing a different standard for rural areas. A tax credit applicant can score two points if its development is within six blocks of fixed-route public transportation in the city of Chicago, one mile in the Chicago metropolitan area, 1.5 miles in another metro area, and two miles in a nonmetro area. In some other states, setasides for rural areas allow tax credit allocators to avoid the TOD discrimination issue.

Outside the tax credit arena, advocates in California have developed a proposal to direct a specific pool of state funding toward investments in housing and transportation. California rural housing interests are developing language that could be added to take account of the transit differences in rural places.

The National Housing Trust – which graciously provided the Minnesota and Illinois examples above – is conducting research on the connections between tax credits and transit and will release a report later this year. Has anyone conducted research on the application of TOD requirements in rural places under other programs? Are there other examples of best practices – or worst practices?

What do you think? Has the TOD focus had a positive, negative, or no effect on rural affordable housing development? Please comment on the Rooflines website.