Continuing resolution likely to run to December 9. Congressional leaders are still working to resolve differences regarding the contents of a CR to keep the government operating when the fiscal year ends on September 30. The measure will also fund other items such as Zika virus control and Louisiana flood relief; a letter from OMB Director Shaun Donovan to key members of Congress requests $2.6 billion in emergency CDBG funding for Louisiana.

Census Bureau surveys yield differing conclusions about nonmetro economic growth. On September 13 the Census Bureau released Income and Poverty in the United States: 2015, showing improvements in poverty rates and median incomes from 2014 to 2015 both nationwide and in metro areas, but no statistically significant change in nonmetro areas. The data came from the Current Population Survey, which used different boundaries for metro and nonmetro areas in 2014 than in 2015, making the year-to-year comparison unreliable. On September 16, a Center on Budget and Policy Priorities analysis of data from the American Community Survey, a larger sample that used consistent boundaries, showed incomes grew 3.4% in nonmetro areas and 3.6% in metro. CBPP found poverty rates dropped by almost 1% in both, to 17.2% in nonmetro places and 14.3% in metro areas.

USDA releases database of rural multifamily loans and projected “exit” dates. HAC recently published an analysis of data on maturity dates of mortgages in USDA’s multifamily portfolio and an interactive map of the properties (see HAC News, 9/8/16). Now USDA has released the loan level data to the public in spreadsheet form.

Final rule addresses harassment in housing. HUD has set formal standards in its fair housing regulations to be used when someone complains of harassment on the basis of race, color, religion, national origin, sex, familial status, or disability. The rule specifies how HUD will evaluate complaints of quid pro quo harassment and hostile environment harassment under the Fair Housing Act, defines the terms, and clarifies direct and vicarious liability in the Fair Housing Act context. Contact Lynn Grosso, HUD, 202-402-5361.

HUD mandates program access based on gender identity. A final rule, effective on October 21, requires providers that operate single-sex projects using funds from HUD’s Office of Community Planning and Development to provide all individuals with access to programs, benefits, services, and accommodations in accordance with their gender identity without being subjected to intrusive questioning or being asked to provide documentation. Contact Norm Suchar, HUD, 202-708-4300.

House and Senate hearings consider HUD changes. On September 21 the House Financial Services Committee’s Housing Subcommittee held a session called “The Future of Housing in America: A Better Way to Increase Efficiencies for Housing Vouchers and Create Upward Economic Mobility,” and a Senate Transportation-HUD Appropriations Subcommittee hearing was entitled “Housing Vulnerable Families and Individuals: Is There a Better Way?” Both focused largely on ways to reduce administrative costs and facilitate tenant self-sufficiency. Some members pointed out that small rural PHAs may face particular challenges to consolidating or forming consortia.

Nonprofits and public bodies can buy some Section 502 homes. An Unnumbered Letter dated August 26, 2016 explains when these organizations can purchase in voluntary short sales by homeowners or RD REO sales. Community Facilities financing may be an option for properties in communities with populations up to 20,000. Contact Barry Ramsey, RD, 202-720-5378.

Research finds disconnect between experts’ and public’s understandings of healthy housing. The complex set of cultural models the public uses to make sense of housing does not always match experts’ views, according to the FrameWorks Institute’s “A House, a Tent, a Box”: Mapping the Gaps Between Expert and Public Understandings of Healthy Housing. Experts in the field explain housing problems based on structural or systemic factors, FrameWorks reports, while members of the public focus on individual responsibility. The researchers suggest that a change in how the media portrays and frames the issue of housing could foster better understanding of housing issues, raise the salience of these issues in public thinking, and generate support for needed policies.

REGISTRATION IS OPEN FOR THE 2016 HAC RURAL HOUSING CONFERENCE! This year’s national conference will be held November 30-December 2 in Washington, DC with pre-conference activities on November 29. Information about registration, scholarships, exhibiting, award nominations, and more is now online. 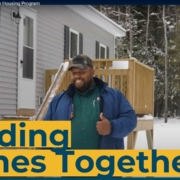