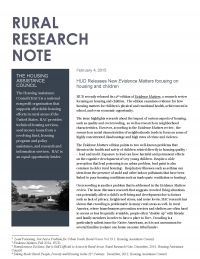 HUD recently released its 12th edition of Evidence Matters, a research review focusing on housing and children. The edition examines evidence for how housing matters for children’s physical and emotional health, achievement in school, and even economic opportunity.

HUD recently released its 12th edition of Evidence Matters, a research review focusing on housing and children. The edition examines evidence for how housing matters for children’s physical and emotional health, achievement in school, and even economic opportunity.

The issue highlights research about the impact of various aspects of housing, such as quality and overcrowding, as well as research on neighborhood characteristics. However, according to the Evidence Matters review, the research on social characteristics of neighborhoods tends to focus on areas of highly concentrated disadvantage and high rates of crime and violence.

The Evidence Matters edition points to two well-known problems that threaten the health and safety of children related directly to housing quality — lead and mold. Exposure to lead can have harmful and permanent effects on the cognitive development of very young children. Despite a wide perception that lead poisoning is an urban problem, lead paint is also common in older rural housing1. Respiratory illnesses such as asthma can stem from the presence of mold and other indoor pollutants that have been linked to poor housing conditions such as inadequate ventilation or heating2.

Overcrowding is another problem that is addressed in the Evidence Matters review. The issue discusses research that suggests crowded living situations can potentially affect a child’s well-being and development due to factors such as lack of privacy, heightened stress, and noise levels. HAC research has shown that crowding is problematic in many rural areas as well. In rural America, where homelessness prevention services and shelters are often hard to access or less frequently available, people often “double up” with friends and family members in order to have a place to live3. Crowding is a particularly salient issue for Native Americans, as it is not uncommon for several families to share one home on some tribal lands4.

FOR MORE INFORMATION ON POVERTY IN RURAL AMERICA

Download Evidence Matters
For more information about research on children and housing, download the current issue of Evidence Matters at: https://www.huduser.org/portal/periodicals/em/EM_Newsletter_fall_2014.pdf.